Welshman Richard and Ali send some Celtic Kelpies back home One of the Celtic Kelpies pups bound for the UK. Image – Ali Davies.

FORMER Welsh shepherd Richard Davies is chuffed about sending working dogs back to his home country after 10 years selecting and breeding Kelpies in Australia.

Ten years after coming to Australia to shear sheep, the now married-with-kids farm manager and Kelpie breeder this week put five Celtic Kelpie pups into quarantine in Melbourne on Monday before they were flown to Edinburgh in Scotland.

The five 2-5 month-old pups – four dogs and a bitch — represent the results of the past 10 years selecting and breeding Kelpies for mustering and sheep handling traits, including to cast and gather in the paddock, a “feel” on stock for close work and apply force to move sheep in yards. Snow is one of the Kelpies the Davies is sending to the UK.

Four of the pups are by his late great sire Idano Tex, and have various levels of Coogee, Karana, Boanong and Gunna blood. Two are bound for south Wales, one to the north-western mountainous region of Snowdonia, the site of the tallest mountain in the country. One is going to Yorkshire and the other is being sent to the English lowlands of Ross-on-Wye.

Richard said the dogs will be getting into a fair bit of hill work, where they are cast out to gather sheep, often in rough mountainous country.

“The one that is going to Yorkshire will be working cattle, but mostly they will work sheep and mostly hill stuff.” Richard and Ali Davies, with son Ernie and Kelpies, Roxy, Bonnie and Frank.

“You need good strong dogs for that; they’re a stubborn type of ewe so you need dogs that actually move stock.”

Richard and Ali have also had success trialling Kelpies in yard, utility and three-sheep trials.

Before coming out Richard worked extensively as a shearer and contract musterer, working with Border Collies, and he knows the areas his UK imports will be working in. His friend Steve from south Wales visited the family at Branxholme a few years ago and the idea for the first shipment was hatched.

Richard said there are already “quite a few” Kelpies in the United Kingdom, but it was a limited genetic pool, with a mixture of paddock and yard-bred dogs. And when he left Wales, the “genuine” Border Collies that could muster all day every day were dying out, partially due to the type of dog being bred for trialling.

“We tried to keep a fairly strong line of good hill dogs and that’s what we tended to use.”

Richard said it is “quite cool” to be now sending dogs back to the UK after having to give up all his dogs before coming out to Australia.

“It has sort of gone full circle hasn’t it?

“It is really good when you think about it.”

Richard rates the type of Kelpie he is sending back to Wales as more of “a thinking dog” than the local talent.

“I think you will be able to send them more out of sight on the hills and they won’t be looking for commands all the time.

“The dogs over there have got quite robotic and think that’s why the Kelpie will go a long way over there, because it can work out of sight without commands, can’t they?”

He said the popularity of trialling in the UK has led to the development of dogs that have lost the ability to work without commands.

“They have just chased those dogs that will do everything you say.

“And I suppose dogs have got weaker because there are more weekend triallers that don’t work their dogs every day, so they don’t need the dogs with these big engines,” he said.

Richard said he hoped some of the Celtic Kelpies will compete in the more trying International Sheep Dog Society trials in the UK, but it is not the goal of the export shipment.

“The people who are getting them, they don’t trial, they just want good genuine work dogs.”

He hopes when the UK farmers see the benefits of a good Kelpie they will make the high prices being paid for working dogs.

“Now it is just a case of getting them into the system.

“When I was young, I think the Kelpies were probably promoted a bit wrongly over there – I just thought of them as the poor man’s Huntaway and all they did was back and bark,” he said.

“Until I came over here shearing and actually saw these big mustering type Kelpies that could also do the yard work and go on to muster a paddock.”

The dog that can do it all … 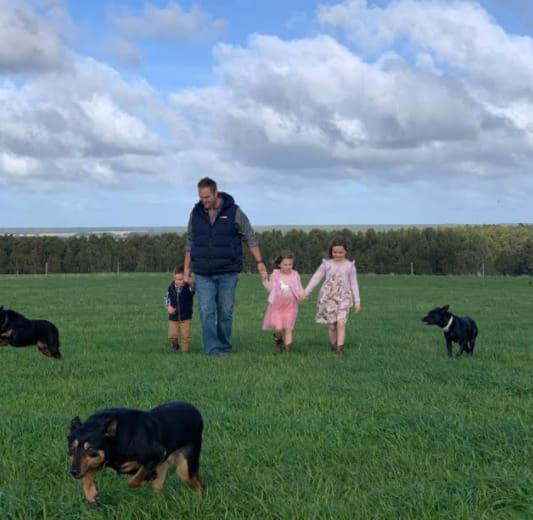 Richard said after seeing these Kelpies in Australia he didn’t turn to collies for his working dog team.

“Why would you when you’ve got a dog that can do it all?”

Richard said he was hoping the first consignment might generally repeat business.

“But it is just nice to have dogs back home really.

“It’s a good feeling to know that dogs we’ve bred and me being originally from there – it’s a nice feeling,” he said.

Richard said the dogs will be working areas from a few acres up to 10,000 acres in open hill country.

“It’s something I have always had in mind is that if we ever went back, I would have loved to have taken a team that could do that work.

“So it has always been in the back of my mind with the breeding to try to breed dogs that would suit over there and I suppose that’s what appealed to these people – that with my background I would know what they were looking for.”