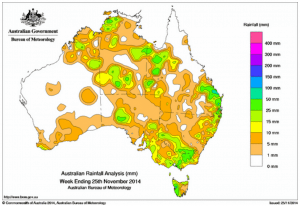 Rainfall recorded across Australia in the seven days until yesterday.