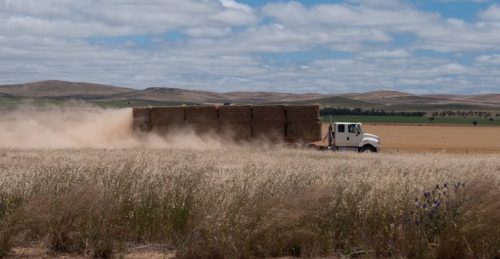 Limited supplies and mice damage point to a need to get hay orders in early.

AUSTRALIAN farmers are being urged not to hold back ordering hay if they believe they will need high-quality feed this winter.

The Feed Central National May Hay Market Report says the weather outlook for predicted rainfall across Australia has changed, prompting some farmers to begin considering the need for fodder.

“The Feed Central team is encouraging anyone that believes they will need feed this winter to not hold back on acting,” general manager Cieran Maxwell said.

“High-quality hay is still good value; however, quality supplies will slip in available tonnes as 2021 progress.”

Buyers were spoilt for choice in hay consumption and able to nominate their price at the start of April, but Mr Maxwell said weather forecasts of average winter rainfall led sellers of high-quality hay to become firmer in their pricing.

Mr Maxwell said that despite having an abundance of grass, some dairy farmers were chasing protein hay to feed now.

“Those that are needing protein hay are encouraged to act quickly as the current available supply is limited,” he said.

With increasing demand, Mr Maxwell said it was likely these hay supplies would be exhausted, leaving only lower grades. He added that parts of Victoria are dry and require hay for immediate consumption.

The May report by Mr Maxwell and account manager Jock Jackson said there has been a favourable start to forage oat production with some graziers looking to also feed straw to help with digestion.

Mice have now entered Victoria, and while many producers have been able to keep the plague under control with baiting strategies, some hay could not be sold. Some cuts of lucerne have had difficulty drying and are on the market at a discounted price.

“Suppliers who are able to safely store their product away from mice and weather are now seeing some of the benefits with well-stored product starting to move.”

To read the full Feed Central May report click here.