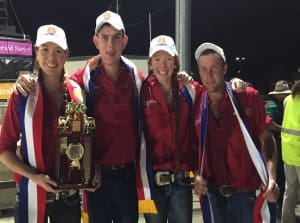 WANGARATTA’S Wranglers have taken out the state title of the Young Farmer Challenge at the Royal Melbourne Show.

The winning team now has the opportunity to compete in the 2016 national title at the Royal Adelaide Show.

In the 2015 event, a record 11 teams of four people raced to complete a series of challenges that demonstrated the breadth of technical skills used every day by farmers; such as stacking hay, leading an alpaca and erecting a portable electric fence.

The event is open to young people aged 16-30 years and is conducted annually by The Royal Agricultural Society of Victoria (RASV) in partnership with Victorian Young Farmers. The RASV said the Young Farmer Challenge is an entertaining, fast-paced event that promoted and celebrated excellence in farming and recognised the next generation of farmers.

The Young Farmer Challenge is one of many events at the 2015 Royal Melbourne Show focused on young participants, as part of RASV’s commitment to inspiring and encouraging youth in agriculture.

The Royal Melbourne Show is open daily from 10am to 9pm until Tuesday, September 29.