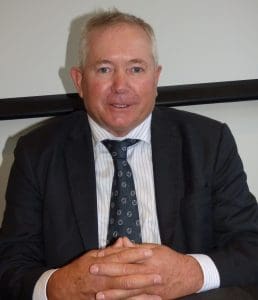 As news broke of the Victorian Government’s decision to mandate electronic tagging for sheep and goats born after January 1 2017, Mr Vallance said the VFF had met with Minister for Agriculture Jaala Pulford and Agriculture Victoria executives yesterday to negotiate producer requirements for a compulsory EID system “if she was to do something.”

He said the VFF had also had previous discussions with Ms Pulford on the EID issue after the release of preliminary results from the national sheep and goat traceability exercise Sheepcatcher II which showed that some sheep in Victoria could not be traced.

The VFF has also asked for an implementation plan of five years and for a two-week extension of the proposed four-week industry consultation period to six weeks.

“She said if you want six weeks you can have six weeks.

“They’ve been talking about it for 15 years, someone has got to move,” he said.

“The Minister has the power to bring these things in and not consult with us at all and tell us it’s a ‘done deal’ and that’s the end of it and fortunately she didn’t do that.”

The VFF Livestock Group has also requested verification of the usability of EID hardware for farmers, which could be done through groups like BestWool BestLamb.

Mr Vallance said the Minister came to the VFF about a week ago and said ‘What would you want this to look like?’

“We have been in discussions with the department about the Sheepcatcher II results and what implications there were to come out of that and this is what prompted the Minister to move at this time,” Mr Vallance said.

The full Sheepcatcher II results have not been released but were “not good”, he said, indicating “the current system is not working the way they say it is.”

“It (the mob-based visual tag system) was found to be embarrassingly inadequate.”

The VFF’s requirements included zero on-farm financial impact on producers in the cost of tagging, funding of off-farm infrastructure, he said.

The EID tags will be the same cost as visual tags for the first year, he said, and the government will put a funding package to saleyards and processors.

“That’s being worked through by the Sheep and Goat Identification Advisory Committee, which is chaired by Stuart McLean.”

Mr Vallance said he had been told Ms Pulford had contacted her other state government counterparts about the decision and he believed a national sheep and goat EID roll-out should be implemented.

“I think the Sheepmeat Council of Australia should go to see Barnaby Joyce today and tell him that this needs to move and I think the other state farmer organisations need to be in their respective state agriculture ministers today saying ‘We need to do this and not get left behind’.

“The Victorian Government has done a really good job with the cattle and sheep tag tenders and that has been the key driver in bringing the price of the (EID) tags down.”

VFF support is not policy change “on the run”

Mr Vallance rejected suggestions that the VFF Livestock Group had changed its policy “on the run” and said the federation’s support for the mob-based system was based around an EID tag price of $1.70-$2 a tag.

“We haven’t changed policy on the run at all, the cost of the system on the industry has been reduced dramatically.”

Mr Vallance said the Victorian Government had given the VFF “a very clear indication” that the EID transition was funded and the Livestock Group will be working hard to ensure farmers and other stakeholders will not face additional costs.

“Livestock producers need a guarantee that they won’t be disadvantaged by the cost of fitting electronic tags to their stock,” Mr Vallance said.

“The State government has offered to invest in eIDs for the first year, but this investment by government needs to be guaranteed for the long term.

“The State Government’s tag tender system is a well proven method of sustaining low cost tags as is evident in the cattle industry,” he said.

“Governments – State and Federal – need to remember they have a community obligation to contribute to the cost of traceability when it comes to major livestock disease outbreaks that affect everyone – not just farmers.

“The VFF still believes the most effective way of implementing electronic tags is to have a consistent approach that’s affordable to farmers and well supported by industry” Mr Vallance said.

“But as it stands, we are determined to negotiate the best possible outcome for livestock producers to guarantee there’s no impact on livestock operations across Victoria due to the Government’s initiative.”

“We will make it clear to government that the cost of post-farm gate EID infrastructure must not be imposed on farmers.”