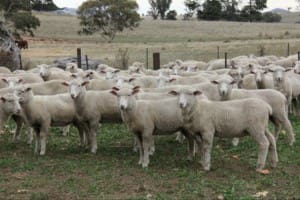 LIVESTOCK farmers across Victoria are expected to seek State Government funding for stock containment areas as a state-wide assessment of conditions by the Victorian Farmers Federation continues.

The VFF yesterday announced it had negotiated an extra $100,000 in funding for stock containment areas in some parts of the state —  the Wimmera, Mallee, North Central and Goulburn Broken Catchment Management Areas.

But Victorian Farmers Federation Livestock Group president Ian Feldtmann said as the VFF assessed conditions across the state and demand for stock containment areas increased, he was expecting to be seeking further assistance.

Mr Feldtmann said the new funding was great news for farmers and brought the current allocation under the stock containment area grants scheme to $600,000.

The new funding means another 50 farmers will be eligible for $2000 towards building a stock containment area on their properties.

“Earlier this month we’d asked Minister Pulford to offer a second round of funding, on top of the $500,000 the government had already delivered.

So we appreciate that the government has listened to that call and lifted the fund to $600,000,” Mr Feldtmann said.

Stock containment areas enable farmers to fence off part of the farm to hold, feed and water livestock in tough conditions such as drought and after a bushfire.

Mr Feldtmann said the VFF believed the grants needed to be extended beyond the four currently-funded CMAs.

“Applications shouldn’t be restricted to a line on a map and as such, we have asked the minister to be more flexible when assessing applications,” he said.

“Lifting the current grants fund to $600,000 is welcome in helping to meet demand in these four CMAs.

“But the VFF is very aware of the growing demand for stock containment areas outside these CMAs and will work with the government to address this growing need as the drought continues.”

Information on the containment area grants and other drought support can be found at www.agriculture.vic.gov.au/drought or through the Drought Information Line on 136 186.