Eligibility for the loans is based on farmers’ properties lying within the boundaries of the Bureau of Meteorology’s 1-in-20 year and 1-in-10 year rainfall deficiency maps. These computer-generated maps compare the latest 24-months of rainfall with the long-term records.

But VFF president Peter Tuohey said the problem is the BOM’s computers redraw these maps every month to cover a new period.

“Drawing lines on maps to determine who gets drought assistance, or not, has always created inequities,” he said.

“But imagine how you’d feel if the line kept moving every month; one month you’re eligible to automatically apply for drought assistance, the next you’re not.

“Sound ridiculous? Well, that’s what the Federal Government has put in place to determine who will gain access to $30m in drought concessional loans,” Mr Tuohey said.

The VFF has already received a call from a farmer, near Birchip, who checked the BOM map in mid-November to discover her property was in a 1-in-20 year rainfall deficiency area, making her automatically eligible to apply for the drought concessional loans.

“Imagine her surprise, when she went back to the map on December 31 and discovered it had been re-drawn to exclude her farm from the 1-in-20 year region,” Mr Tuohey said.

NFF takes issue up with Joyce

Mr Tuohey said it’s an absurd situation and one the VFF has raised with the National Farmers Federation’s Drought Taskforce, which has taken up the issue with Federal Agriculture Minister Barnaby Joyce.

“The reality is we need a more sophisticated model that considers growing-season rainfall and is ground-truthed by people who understand agriculture,” he said.

In the past the National Rural Advisory Council played a key role in touring drought affected areas to assess the need for drought support.

“I know we can never have a perfect system that’s fair to all,” Mr Tuohey said. “But we can do a lot better than this.” 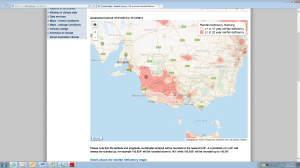 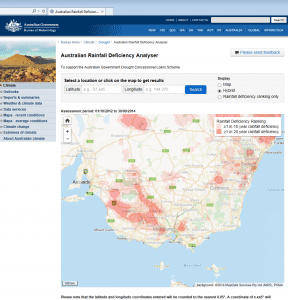