Twins and triplets can outperform singles 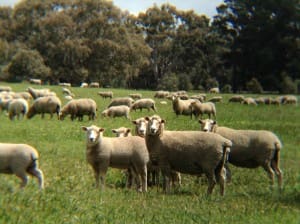 First cross ewes with lambs in the Shelford trial

Recent research has shown commercial sheep producers can sort good ewes and rams from lower performers with equipment worth less than $11,000.

Research using weighing equipment many sheep producers have, costing about $10,500, showed that many twins and triplets can outperform some single lambs in the same commercial flock and very high growth rates were possible in maternal-bred lambs.

The Victorian project, run by Mike Stephens and Associates, has used electronic ear tags and Pedigreed Matchmaker to link crossbred ewes with the live weight and growth rates of their maternal-sire lambs to calculate a litter weight – the combined weight of lambs weaned by a single ewe.

The project found that of the top 100 lamb growth rates, 33 were achieved by twins or triplets.

Reporting in the Autumn 2014 edition of the Department of Environment and Primary Industry’s Sheep Notes, MS&A livestock production consultant, Nathan Scott, said the lowest growth rates achieved were 150-250 grams a day and the highest rates of 540-560 grams were achieved by a single lamb and two twin lambs from separate litters, demonstrating the importance of individual animal performance. He presented the trial’s results at the Lambex 2014 conference in Adelaide last week.

“This is remarkable given the disadvantage to twins and triplets that stems from the assumption of the calculations about a common birth weight of six kilograms and perceptions about slower growth in multiple lambs,” Nathan said.

The equipment used in the trial included a panel reader with built-in or separate data logger and deep cycle battery with a total value of $3500 plus a weighing crate, weigh bars and wand or panel tag reader costing about $7000.

First cross and composite ewes on Shelburn at Shelford in Victoria were run in three flocks under similar nutritional management and trained to walk in single file past a tag reader placed strategically in a paddock at a water-access point or leading to an attractant such as a lick.

“I’ve seen the benefit in one season and I am very optimistic about where I can go in a few years.”

Nathan said the trial showed that without understanding individual performance, producers knew very little about what was happening within a group of animals.

“We need to understand there is huge variation in performance between individuals and people have underestimated the performance of a lot of the twin lambs.”

He agreed the trial also showed that producers might be underestimating the ability of ewes to raise multiple lambs at high growth rates equal to single lamb rates.

“It shows that when we get all the ducks to line up we can get that very high level of performance.

“It is a combination of two things – it’s getting the ewe set up so she can do a lot of the work and also having the quality of pasture to make up the difference between what the ewe can produce and what the lamb required to achieve high-end growth rates.”

The trial collected reliable pedigreed data for 517 ewes with 780 lambs and then compared with lambs weights recorded at an average of 85 days.

– the massive variation in performance of individual ewes within the flock;

– that with training, a high proportion of lambs can be reliably matched to their mothers in a commercial flock for productivity analysis.

– that it is possible for a commercial producer to practically assess performance of various genetics (ewes and rams) using electronic ear tags.

“Once this variation has been measured, applying appropriate selection pressure will result in valuable productivity gains,” Nathan said.

He said the trial also showed ewes can at scanning (with multiples) have the same production potential, but some didn’t deliver on it.

“It is something we can’t actually assess without understanding what they are actually producing and the only way we can do that is to find which lambs belong to which ewes.”

“The concept of using litter weight weaned as a selection criteria is nothing new, as geneticists have been confident in its impact on production for many years,” Nathan said.

“All we have done is find a method of using electronic ID to make it practical for applying within a commercial flock.

“This is a big development for commercial lamb producers.”