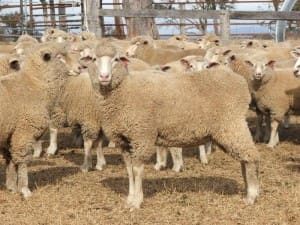 Mutton rates also lifted at all centres, up over the 400c/kg mark, and particularly for medium and heavy sheep, after the re-entry of an additional buyer in Victoria.

Most NLRS lamb indicators on the rise

After Thursday’s saleyard sales, the National Livestock Reporting Service quoted all national and Eastern States Daily Indicators for lamb and mutton as improved, except for the heavy lamb indicators, which were firm on 598c/kg.

In NSW at the Central Tablelands Livestock Exchange at Carcoar, the agents yarded 8500 lambs, 100 more than last week, and 4300 sheep, 100 more.

The NLRS said lamb quality was a little mixed, but there were plenty of well-finished trade and heavy weighted lambs. Light store lambs were limited and most of the usual buying orders were in place.

The NLRS said lamb quality improved in the trade and heavy lamb categories. A full field of buyers were in attended, but not all major export buyers operated. There was limited restocker and lot feeder activity, with well-bred second cross lambs selling to dearer trends. Trade lambs were in reasonable numbers, along with increased supplies of well-finished lambs, presenting in a shorter skin.

Merino lambs were in reasonable numbers and well-finished pens suitable for the trade made from $113-$136. Plainer light weight Merino lambs sold to the processors around $18 dearer, ranging from $83-$112. Well-bred second cross lambs returning to the paddock or to place on feed sold from $83-$130.

Mutton quality improved, with more heavy sheep penned. Merino ewes suitable for the trade were well-supplied and made from $75-$120 to average 429c/kg cwt. Heavy sheep sold to solid demand, with heavy cross bred ewes reaching $140. Heavy wethers made from $124-$138 to average 456c/kg.

All the regular buyers were present, plus an extra domestic processor who had not attended the sale the last few weeks provided increased competition. Restocker interest was only limited at times.

The NLRS said trade weight and heavy lambs were available in reasonable numbers in an average quality yarding. The usual buyers operated strongly in a dearer market, with lambs selling $5-$10 up on last week and more in places.

Restocking activity was limited, with restockers paying $126-$146 for Merino ewes with lambs at foot. The sheep offering included all weights and grades that sold to strong competition, with an outstanding pen of shorn Merino wethers estimated at 35-36kg cwt making $153.50.

The NLRS said it was a very mixed quality yarding. No live export buyers attended.