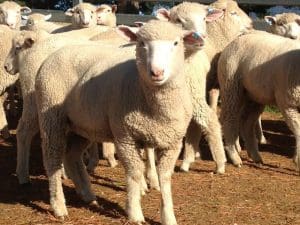 PRICES for trade and heavy lambs in saleyards were generally firm mid-week and only dearer for quality lines as agents managed to lift supplies ahead of imminent widespread seasonal processor closures.

Domestic processors continued to pay over 700c/kg for the best well-finished trade and heavy lambs and strong southern exporter demand for light lambs lifted rates for lines under 18kg cwt.

Slightly lower rates paid for secondary trade lambs by domestic buyers and for heavy lambs by exporters in some centres dragged the National Livestock Reporting Service’s indicators down.

However, the current average indicator rates for all lamb categories are year-on-year 48-54c/kg up on 2015 levels at this time and the heavy lamb prices are continuing at the highest levels since 2011.

The first turn-off of new season lambs has started in New South Wales. Some producers have marketed lines direct to supermarkets and on AuctionsPlus, and a small number of young lambs in the Carcoar saleyards on Wednesday, 20.1-22kg cwt with $8-$10 skins, made $150-$160 a head, or 693-714c/kg cwt.

Overall mutton values lost ground mid-week, with buyers being selective around quality and not all buyers operating fully in some centres. The ESDI for mutton on Thursday closed at 412c/kg, down 4 cents, and the national mutton indicator also finished 4 cents lower, on 411c/kg.

The NLRS said lamb quality was more mixed, with some well-finished heavy and trade lambs, and plainer lines. Most lambs were trade weights, but here was a handy supply of heavy weights and plenty of stores. All the usual buyers operated in a mostly firm to slightly dearer market.

The NLRS said lamb quality was plainer due to the recent cold weather. There was a good number of light lambs, a limited supply of ideal well-finished trade weights and a small run of heavy weights. Not all the usual buyers operated in a quality driven market.

Sheep quality was mixed. Better mutton sold for similar prices to last week, while secondary lines were cheaper. Medium weights ranged from $76-$110 and heavy ewes $101-$138. Most averaged around 400c/kg.

There were increased supplies of secondary lambs and most sold to export buyers. All major export and domestic processors operated fully in the fluctuating market.

Prices for trade lambs fluctuated and the better finished pens were equal to slightly dearer. Heavy lambs lost some traction in places due to the lack of weight. Well-finished grain-fed trade lambs attracted the strongest bidding, while grass-finished pens at times struggled to attract major buyers due to a lack of fat cover.

Generally trade lambs sold firm to $9 dearer, with shorter-skinned lambs benefiting from strong supermarket competition to push over 700c/kg. Across the board, trade lambs averaged 665c/kg. Merino trade lambs sold to solid demand, regardless of skin length, from $115-$164. A southern export processor bought most of the lighter lambs. Light weight lambs sold to processors trended dearer at $93-$132. Restockers were again cautious, with only limited numbers bought at up to $126.60.

The mixed quality offering of sheep included all weights and grades. The market for heavy ewes lost its intensity as not all buyers operating fully. Sales averaged 423-435c/kg. Light and medium grades generally sold from 376-427c/kg.

The NLRS said lamb quality was good to average with many showing less cover, although there were some very good trade weight lambs.

Sheep quality was mixed, with some good quality lines of Merino wethers and crossbred ewes. Prices were overall firm to slightly dearer, with light and medium weights improving the most and heavy mutton rates back in places. Restocker activity was minimal with one agent paying $80-$85 for 445 young Merino wethers.

The NLRS said lamb quality was average to good, the usual buyers operated strongly and lambs generally sold firm to $5 up on last week.

At the Ouyen saleyards on Thursday, the agents yarded 6652 lambs and 1655 sheep.

The agents quoted export lambs selling firm to slightly easier and trade lambs $3-$6 dearer than at the last sale two weeks ago.

In South Australia at the Mt Gambier saleyards on Wednesday, the agents yarded 1589 lambs and 139 sheep.

The NLRS said a small field of trade and processor buyers were active and bid strongly on the generally good quality offering.

In Western Australia at the Katanning saleyards on Wednesday, the agents yarded 3151 lambs, 3207 fewer than last week and 2000 sheep, 2000 less.

At the Warwick saleyards on Wednesday, the agents yarded 1268 lambs and hoggets, and 253 sheep.

Agents quoted prices for the slightly smaller yarding of sheep and lambs as firm on last week’s rates. The top-priced lambs sold for $170 for G.N. and C.E. O’Leary of Clifton.