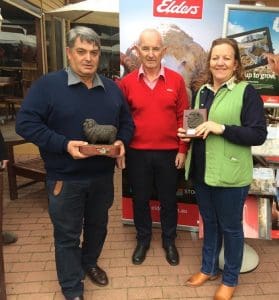 And some of these advantages were highlighted in the latest December-shorn clip, which won the Elders Supreme Clip of the Year award for the northern region for the first time last month.

Elders Melbourne showfloor manager Mal Nicholls said the winning Warrandale clip displayed excellent style, was very even in all respects and had a low mid-point break coupled with high tensile strength. The clip had an average tensile strength of 44 Newtons/kilotex. It was well classed by Ian Lugsdin and accompanied by a faultless specification, he said.

The Warrandale wool operation of about 4000 Merino ewes on about 7690 hectares is managed by Ian’s wife and former bookkeeper Stacey Lugsdin with the help of daughter Annabelle, 25, and son Tom, 21. Another 500 Merino ewes are joined to White Suffolk rams at the 400-hectare home base property ‘Birriwa’ on the Murrumbidgee River.

Ian runs a Toyota dealership in Hay, helped by daughters Polly, 28, and Harriet, 20. The eldest Lugsdin daughter, Ellie Quinn, 31, is a teacher at the Yanco Ag High School and another daughter Jessie Gordon, 29, is married to Ardlethan property manager Trent Gordon.

Stacey Lugsdin said the switch to eight-month shearings three years ago has lifted the average tensile strength of the clip regardless of the season, from around 35N/kt to range between 43-53N/kt in the latest December-shorn clip sold in January. The clip averaged a yield of 67pc and the most of the fleece lines sold from 1309-1372c/kg clean.

“We find we have a very low mid-break in the staple on the top or the base, but never in the middle, because of when we lamb, and that’s what the processors are after.

“Our tensile strength has at least improved by from 5-10N/kt,” Stacey said.

“We seem to be getting a better price as well.”

One of the Warrandale lines sold in January made $1825 a bale with wool shorn at eight months growth.

Eight-month shearing and selection is cutting need for crutching

“We normally don’t crutch, although if necessary we will do a quick light pre-shearing crutch ourselves.

“We are trying to breed out that dag issue,” she said.

“I would say we are getting up to about 60 percent of sheep which we wouldn’t need to touch, but it depends on the mob’s age and the season.”

She shifted from Poll Boonoke rams to Woodpark Poll to utilise Australian sheep breeding values for meat trait selection, while maintaining wool cuts. She has noticed higher growth rates in the lambs, although this year this can also be attributed to a better season, with good rains falling since April this year.

“In Hay’s semi-arid environment we are still primarily wool growers, but it is our long term goal to get better carcases traits.”

But she wanted better carcase traits mainly for the flock’s ewe base, to improve eye muscle depth and genetic fat to lessen the need for supplementary feeding and to improve lamb survival. The 3000 mature ewes joined this year marked about 25pc more lambs than last year, although this was without the maiden ewes who were not mated due to the season.

“Even though we shear every eight months, we still only join once a year because of the environment.”

Stacey is also selecting for plainer bodied sheep with less wrinkle, but with an emphasis on skin follicle density to maintain cut per head.

“We have to look after our country so what we need to be able to do is make the sheep that we have more productive wool cut-wise.

Stacey said the only time management drawback with eight-monthly shearings is when the August shearing coincides with a lamb marking.