This genetic option to mulesing can keep quality wool on Merinos 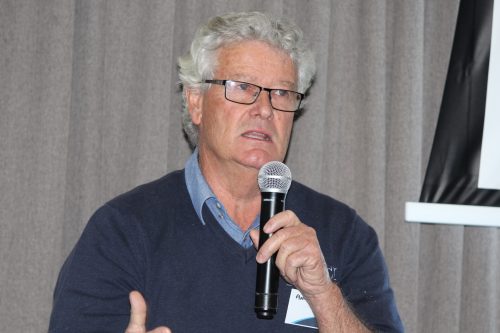 MERINO breeders selecting for high follicle density can breed a high wool and meat-producing dual purpose sheep that would not need to be mulesed, according to South Australian breeder Andrew Michael.

At a sheep focus workshop at Snowtown on 9 April, Mr Michael’s son Alistair will outline how follicle density-based selection can be a genetic solution to mulesing in the Australian Merino flock.

The workshop at the Michael family’s Hummock Station will also feature a number of leading speakers on animal welfare and production.

The Michael family’s research into selection for high follicle density and its impact on fleece, skin type and breech is a central plank in the family’s ‘industry for the future’ goal of producing an animal balancing quality and production to meet market and consumer demands.

“There is enough data now to show that because you’ve got that plain skin you are still maintaining negative EBVs for breech wrinkle, and in all of these animals that we’ve identified with a high follicle density, there is no negative correlation for meat production,” Andrew Michael said.

“And some of them are the highest meat production animals (Merinos) we have on the place.

“We have a sheep that we will use on that day that has estimated breeding values for follicle density.

“She is the highest (ranking animal) we have got for follicle density – she’s +21 fibres (a breeding value as an expression of fibres per square millimetre),” he said.

“But the interesting part is she is -0.9 for breech wrinkle and doesn’t have to be mulesed.”

Mr Michael said the ewe sits in the top 2 percent for every index on the Sheep Genetics database for carcase, meat and wool – with pure white wool and a negative EBV for breech wrinkle. 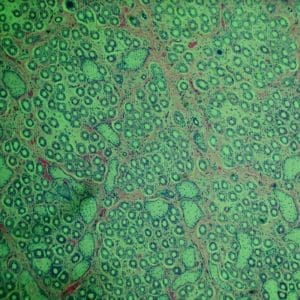 Mr Michael said the research into high follicle density proved that selection for plain skin in Merinos need not lead to lower fleece weights and a low-value product.

“I’m hoping in the next couple of weeks that we can totally debunk that myth.” 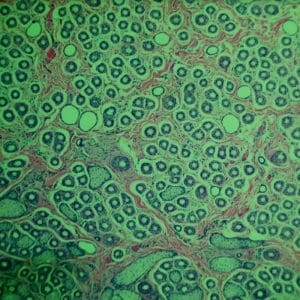 Mr Michael said the ewe has an EBV of -2 for micron, +31 for fleece weight, was +12.6 for staple length, +9.5 for growth (which yearling growth)and positive for fat and muscle, and in the top 5 percent for intramuscular fat.

“She sits in the top percentile and was 15.9 microns at 12 months and cut half a kilogram more than the average of her in-flock contemporaries.

Mr Michael said there are some qualifications in the impacts of selection for high follicle density.

“There is no negative correlation for fleece weight or quality, but if you select purely for high follicle density you will shorten the staple and lower the micron, which will take the fleece weight off.

“So you still need phenotypic selection to select the right animals.”

Follicle density selection is a great tool, not a silver bullet Alistair Michael said selection for high follicle density should be seen as a great tool and not as a silver bullet.

He said Leahcim’s interest in doing its own follicle density and skin biopsy work grew from a visit from a group of Alpaca breeders from the United States about eight years ago.

“The wool market crash in the 90’s saw funding cut, but there are some great papers illustrated that we read to gain our knowledge,” he said.

“Also working with Dr Jim Watts in the early days, Andrew had a very good understanding of the importance of follicle density and skin structure.”

“We have deliberately bred to reduce surface area, by reducing body and breech wrinkle.

“We can measure length and micron no problem, and we decided the missing puzzle piece was density of fibres.”

Alistair said a small skin biopsy is taken from the last rib a hand span down from the spine and this sample is then prepared on a microscope slide.

“In the early days, we counted each fibre individually, through a microscope camera that transmitted the picture to a computer screen, now we have a computer program that uses artificial intelligence type function to identify fibres and count them automatically, making the process much easier.”

The Michaels have analysed more than 1300 samples, mostly rams; however, they are now identifying the top run of ewes each year to conduct embryo transfer on.

“The results have since been entered into Sheep Genetics, and as with all data, outside influences such as twinning affect needs to be taken into account.

“Sheep Genetics have then given us a breeding value,” he said.

Alistair said unfortunately there aren’t many other people doing this type of research and the industry had lost many people with the necessary skills and knowledge.

Australian Wool Innovation is funding research by the University of Adelaide’s Centre of Excellence for Nanoscale Biophotonics into development of a hand-held follicle density scanner.

The sheep focus workshop next week will also include a range of top speakers on industry programs, sheep breeding, marketing, risk analysis and livestock well-being.

Meat & Livestock Australia managing director Jason Strong will outline how MLA investments up to 2025 will focus on delivering “fewer, bigger and bolder” programs, and director of the University of Adelaide’s Centre of Nanoscale Bio-photonics Professor Mark Hutchinson will show how livestock neuroscience can quantify well-being to increase productivity and promote market access.

Sheep consultant Jason Tromph will speak on breeding traits and goals to maximise numbers of lambs weaned, and Mercado managing director Robert Herrmann will speak on pro-active risk analysis and management in the sheep industry. See the full program below.

The workshop will be held at Hummocks Station, 45 Barunga Homestead Road, Snowtown, SA, from 9am-4.30pm ACST.

Although participation is free, registration is essential, with morning tea, lunch, and afternoon tea to be provided for those attending in person. This event is  partnered by Livestock SA, SA Sheep Industry Blueprint, ANZ, Leahcim and Hummocks Station Tourism Park and Function Centre. Due to Covid-19, attendance will be capped to adhere to social distancing regulations. The event is in-person and a recording of the day to be released at a later date.