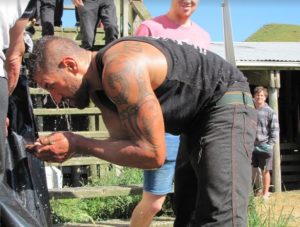 Stacey Te Huia after abandoning one of his record attempts four years ago. Image – SSNZ

PROLIFIC shearing record breaker Stacey Te Huia arrived back in New Zealand at the weekend to start the countdown to a rare Merino wether record bid in Central Otago.

The New Zealand shearer has a 50:50 record of achievement from eight record attempts over the last decade. He could be shearing more than 1.7 tonnes of wool if he’s successful in the solo 9hrs fine wool wethers record bid on December 7, at The Bend, about 10km from Ranfurly.

As a special tribute to daughter Shaylyn, who died at the age of 16 in 2015, it doubles as a fundraiser for suicide awareness programmes, with major support from and for Tribal Nations Motorcycle Club, which was formed in 2014 to spread awareness about all forms of violence and suicide.

A Saturday has been chosen to increase the potential for the cause.

Te Huia has ridden on several of the Tribal Nations rides and others it supports, and says he’s appalled by the statistics for suicide in New Zealand, especially among teenagers. “Six or seven hundred a year,” he says. “That’s wrong. Not enough is being done to prevent it.”

The target on the shearing board will be the record of 418 shorn by Rakaia shearer Grant Smith on November 4, 1999, one of the oldest records on the books of the World Sheep Shearing Records Society.

It’s possibly the toughest of the record categories, with sheep required to average at least 4kg of wool each, as tested in a pre-record sample shear before a four-man Australasian judging panel appointed by the society.

Projections of a possible tally on the day are not part of the preparation, Te Huia saying only that as far as he is aware the only tallies over 400 on merino wethers were Smith’s record, and those shorn by Smith and workmate Barry Taylor in a two-stand record in 1994.

The only forecast he’s watching is that for the weather, he said after an hour in the gym in Wagga Wagga, NSW, midweek.

It came at the end of a day shearing 400 crossbred lambs in the woolshed during which temperatures hit well over 40deg outside, with a bit of smoke and haze from the bushfires several hours away.

The computer-generated forecast for Ranfurly 10 days out was for a maximum temperature of 20deg, he said. “That would be perfect,” he said.

Whatever the climate, it sounds like a tough day ahead, for Te Huia will be on the board for the start at 5am for the two-hour run to breakfast, which will be followed by four runs of 1hrs 45mins, and four prescribed breaks – an hour each for breakfast and lunch and 30 minutes each for morning and afternoon smoko.

Regardless of the tally he will shear through to the end at 5pm.

He’s been through the full-range of emotions over the years from the initial triumph of an 8hrs strong wool ewes record of 603 in a King Country woolshed in 2010, to two nine-hour strong wool record attempts in which he shore more than 700 but still failed to get the record, and one where he had to give-up early, realising the record on the day was out of reach.

He’s still in the records book for the two-stand strongwool ewes record 9hrs record of 1341 he shore with long-time friend Sam Welch back in the King Country in January 2012 and the 9hrs merino ewes record of 530 he shore in Australia in February 2015.

While the latter is often referred to as one of the greatest days in shearing records history, he says it is the two-stand success that brings back the proudest memories.

Te Huia shore 674 and Welch 667, and Te Huia says: “My mate Sam did well. I had a bad first run. That was tough and we had our backs against the wall.”

As with all records, there will be huge support, including that of the record-holder Smith, with whom Te Huia shore in a New Zealand Merino Shears team merino shearing match with a Royal Perth Show team in Western Australia in September.

A team of well-over 30 helpers will include Alexandra employer Mouse O’Neill and fellow Central Otago contractors Dion Morrell and John Stringer, with records-breaker and former national champion Morrell on the board throughout monitoring times to keep the shearer up to the mark.

Others will include the three other record breakers in the family, brothers Aaron and Hayden and sister Kerri-Jo, with whom he grew-up in Marton, and parents Dean and Jo Te Huia, now of Te Kuiti and both of whom have spent a lifetime in the industry.

Also on hand is expected to be Queensland-based fitness, health and nutrition consultant Dylan Fowler, a former South Canterbury shearer.

It will be the first of five shearing record bids in New Zealand and Australia during the summer.