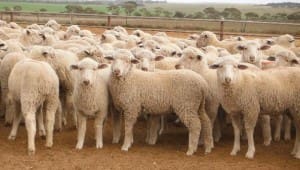 TRADE and heavy lamb prices were softened by buyers this week as more new season lambs came into NSW saleyards and supermarkets started to turn away from heavier old lambs to buy suckers.

For the past few months domestic processors have been buying heavier lambs to maintain quality in their orders, but in NSW, supermarkets, butchers and light lamb exporters are now able to buy the heavier end of the new season lambs.

In SA, producers hit by lack of rain and frosts slowing pasture growth are starting to turn off light suckers early, but values for light lambs 14-16kg cwt are being held up by strong export or domestic side lamb orders.

Restocker demand at many centres, especially in SA, is being constrained by a lack of confidence, driven by seasonal conditions and rainfall outlook. In some cases, lack of feed in western SA is forcing producers to sell joined Merino ewes for their mutton value rather than risk not being able to support ewes and lambs in a tight season.

Quality Livestock auctioneer at Dublin Peter Reichstein said despite the tight season in parts of SA, at least producers had good options for all classes lambs and mutton, despite the lack of restocker demand. Many producers were nervous about the season and rain forecast rain for the next week was needed to restore confidence. But he said if the season stays dry many producers will turn off new season lambs early, “while the money is there.”

“I think a lot of blokes will sell lambs off and look after the ewes.”

Elders auctioneer at Dublin Matt Ward said if SA did not receive good general rain in the next two weeks, producers would be forced to sell “heaps of lambs”, especially on the west coast, Yorke Peninsula, through the Mallee and Upper South East SA. He said many 4-5-year-old ewes in the Upper SE SA have already been sent to abattoirs because of the season.

“If there isn’t a good rain then there will be a lot of lambs sold early and come October maybe there won’t be many lambs about.”

Forbes agent Scott Reid of VC Reid and Son said with new season lamb number hitting 3000 this week – about 8 percent of the yarding – supermarkets buying suckers were then only buying choice pens of older lambs. The supermarkets were also buying fewer pens of export weight lambs.

The ESDI for mutton finished on 395c/kg and the national is on 393c/kg, both down one cent.

Over-the-hook lamb rates up in Victoria, down in NSW

Over-the-hook rates for lamb and mutton were quoted as unchanged in Western Australia and Tasmania.

The NLRS said it was a fair to good quality yarding with a good mix of trade and heavy weight lambs and expected lighter weights.

The NLRS said it was a good quality lamb yarding, with most coming off crops. However, there were a few pens of light plain lambs. There was a good supply of trade weights and some light lambs, and good runs of well-finished heavy lambs. Trade lambs sold firm to $5 cheaper, while heavy lambs were firm to $3 dearer.

The mixed quality mutton yarding had several well-finished lines and a few pens of light 2 score sheep. The market was not as strong as last week, with sales varying from firm to slightly cheaper.

The sheep yarding had more heavy ewes and wethers, with several full wool lines. The market remained strong for all classes of mutton. Medium weight Merino ewes sold from $72-$81.60 and averaged $75.70, back $16, while Merino wethers were $8 cheaper on $86.40.

The NLRS said lamb quality remained very plain overall, with a lot of small and mixed pen lots in the yarding as farmers cleaned out tail-end drafts of old season lambs. All the usual buyers attended, but not all operated fully, with the main export companies only offering limited support. Prices varied on quality and carcase finish.

Better finished slaughter lambs suiting the top domestic orders sold firm to a few dollars dearer, while secondary trade lambs and heavy export lambs were generally $2-$7 cheaper. The market reached a top of $185 for a pen of just four extra heavy export lambs. A more notable sale was 210 first-cross ewe lambs, estimated at about 27kg cwt, which sold at $175 to restockers.

Most of the domestic weight lambs were plainer types lacking finish and they sold from $102-$130 at varying carcass prices. Light weight kill lambs generally made from $69-$96. There was a reasonable selection of Merino lambs, although most were lighter weight types in plain score 1 and 2 condition. The smallest Merino lambs sold to restockers at $30-$68.60, while the general run to processors made from $78-$114, or around 510-530c/kg cwt. Odd pens of better covered trade weight Merino lambs sold to $135.

The lead pens of slaughter lambs suiting domestic orders sold from $136-$172 and averaged over 600c/kg, with select pens that ticked all the specifications for weight, skin and fat score making to 660c/kg cwt. Bidding for heavy lambs over 27kg cwt was subdued and export lambs averaged cheaper, with quality and limited numbers a factor.

The sheep yarding had all weights and grades, including odd pens of ewes with young lambs that sold to restockers. Prices varied from cheaper to dearer for an overall result similar last week. Not all export companies attended the mutton sale. Heavy crossbred ewes sold from $103-$134.60, with some of the younger-aged and sound lines selling to restockers. Longer wool Merino ewes sold to $122 and wethers to $120. The general run of medium weight sheep sold from $62-$81, with plain and light types from $32-$56.

The NLRS said an average quality yarding was offered to the usual buyers, although not all operated fully.

The better presented domestic lambs sold similar to last week, while heavier lambs were $2-$5 easier, and the plainer trade weight lambs eased $5-$10 in places. Feeders and restockers paid from $95-$127 for lambs and from $60-$80 for lighter drafts. Light weight 1 and 2 score lambs sold from $72-$100.

The NLRS said lambs sold to easing competition from the usual trade and processor buyers, minus one major processor. The quality of the offering deteriorated compared to last week and bidding was subdued. Feeder and restocker participation was limited.

The NLRS said lamb quality was very mixed, with only a few pens with decent weight and condition. Fewer trade and processor buyers attended, but all were active, while restocker activity was minimal. Prices tended to be easier across the whole market.

The NLRS said lamb quality was mixed, with most lines either tail-end drafts, light and secondary trade weights. More Merinos were offered. Most buyers were present and there was more competition, particularly on the ewe categories.

Ewe supplies were limited and prices lifted with additional competition on most categories. Light ewes sold close to firm at $40-$67. But 2 score ewes to processors were much dearer, making $67-$80, or 325c/kg cwt. Better conditioned and heavy weight ewes made $70-$110, also up substantially. The very heavy crossbred ewes sold to $110 and the best Merino drafts made to $98.50.

Restockers purchased young Merino ewes for $55-$80 made mature drafts made $55-$65. Wether prices were dearer on improved quality. Export weight drafts made $80-$114 to live exporters, processors and feeders, with the dearest wethers going to a feeder buyer having a skin worth more than $20. Lighter and store wethers also lifted slightly with most making from $67-$90. Ram lambs sold to $92 and with young rams went to live export and feeders at $55-$88. Old rams sold to processors for $30-$70.