AN ONLINE RSPCA conference exploring the impacts of climate change on animal welfare yesterday heard a call for a strengthening of laws to protect livestock from extreme temperatures. In a Q&A session following her presentation, she was asked if animal welfare laws for duty of care for protecting animals from extreme temperatures need to be strengthened.

Professor Hughes said she believed stronger penalties were required, as many existing pieces of legislation governing animal welfare in Australia were written at a time when climate change was not a topic on everybody’s mind.

Just as people were locked up if they left a child unattended in a car on a hot day, penalties for not protecting animals from extreme heat needed to be sharpened, she said.

“Animals, especially captive animals in small places can’t adapt to extreme temperatures by changing their behaviour, because they don’t have the opportunity to do so, unlike humans, where we can retreat inside, wear a hat, put the air conditioner on, get a nice cold glass of water.

“Often animals are in situation where they are not in control of all of those things.

“So bearing that in mind I think it is just important to have an awareness raising campaign about animal welfare and extreme temperature as it is changing the laws. Both are important.” 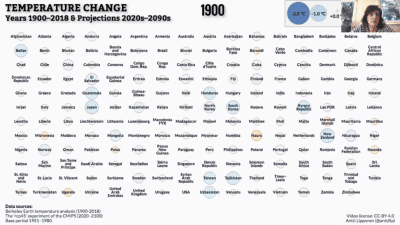 Using charts to illustrate temperature anomalies since 1900 and projected temperatures under a mid-range emissions scenario through to 2090 (right and below), she said the basic message was that “it doesn’t matter where you are in the world, things are projected to get much, much hotter.” Impacts were already being felt with fires recently penetrating ecosystems that have never burnt before, she said.

Climate change affects on livestock, wildlife and pets included direct impacts such as extreme heatwaves which could kill animals directly and impact on animal’s stress levels and rates of immune suppression.

Indirect impacts included affects on the quality and quantity of food and drinking water, and the distribution, transmission and virulence of pests and pathogens.

Climate change was also potentially affecting nutrition in both positive and negative ways, she said – on one hand plants grew faster and bigger when fertilised with CO2, which led to an increase in crop biomass. But on the other hand, crops that grew faster and larger tended to become less nutritious.

Higher temperatures could also increase the incidence of fungal toxins and more parasites and vector-borne diseases, she said.

A lot of these vectors moved southwards toward cooler areas as temperatures increase.

A three degree increase in ambient temperature could be associated with a doubling of the extent of fly strike and the southern spread of cattle ticks.

Earlier US ethicist Katie McShane, a professor of philosophy who is focusing her research on environmental ethics noted that impacts on animal welfare were “notably lacking” in existing reports and literature on impacts from climate change.

As an example, the IPCC’s 5th assessment report discussed effects on the economy, on human welfare, on ecosystem services, extinction rates and biodiversity, the entire report contained only two mentions of animal welfare.