ANOTHER strong week on the spot wool auction market helped keep the forward markets in premium as hedging levels broke through some grower’s initial target levels.

There has been much debate as to what level growers will begin to release larger hedge volumes.

With passed in levels around 10 percent, growers are releasing the vast majority of their spot wool to the market.

The forwards traded at a premium throughout the week keeping pace and out stripping the spot index.

Volumes were a little better at 52.5 tonnes, but are still only accounting for 1pc of equivalent auction turnover.

The majority of growers seem reluctant to set hedge levels. This is understandable as the volatility makes setting a fair value target difficult. The graph below not only highlights range of price over the last 14 months, but the varied impact on different microns. For example, the 19 micron index has averaged 1382 cents for the last year, within a range of 996-1844 cents. This would indicate that hedging at 1600 cents-plus is a sound strategy. This is true, but it is also important to look at the longer-term price trends when setting initial and supplementary hedging targets.

Next week it is 12 months since the cyber attack that halted spot auctions for a week and heralded in “annus horribilis” and the unprecedented health and economic challenges that the world is still grappling with. It put into stark focus how these “Black Swan” events and other demand shocks can negatively impact on enterprise outcomes.

Buyers indicated that the spot auction lacked momentum into the close of Melbourne sales on  Thursday, particular in the finer wools. We will probably see a little hesitancy in bidding ahead of next week’s round of auctions. 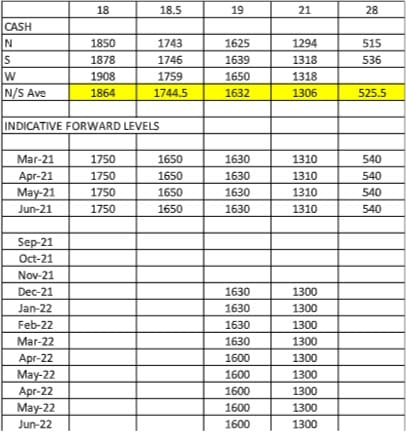 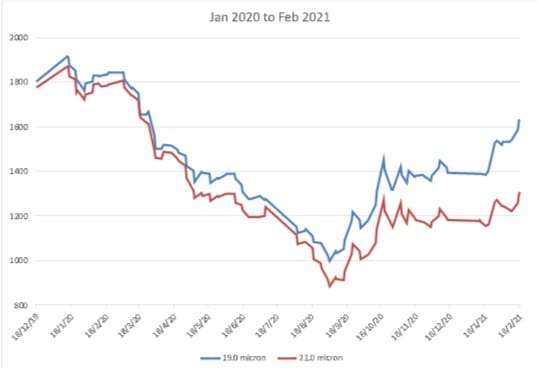