Store lamb demand strong in saleyards and on AuctionsPlus 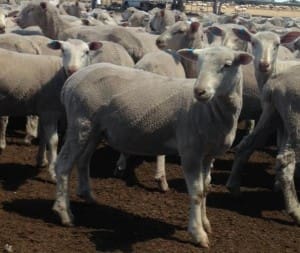 And prices in the store lamb categories – restocker, Merino and light lambs – continue move upward in saleyards and online with AuctionsPlus, as restockers compete for dwindling supplies.

The National Livestock Reporting Service quoted slaughter lambs as cheaper at Griffith on Friday, but the best restocking lambs still sold to 588c/kg cwt, light lambs made to 571c/kg, trade lambs to 591c/kg and heavy lambs to 577c/kg.

“I didn’t think it was any cheaper personally in our run.”

Mr Flagg thought the numbers of lambs going direct to slaughter might be dropping off now.

“There was good competition right through for the best lambs.”

At the Cowra saleyards, prices were firm to dearer for all lamb categories, with the best quality light trade and heavy lambs making up to 600c/kg-plus. Medium trade lambs 20.1-22kg cwt with $4-$8 skins made up to $140 or 618c/kg.

After Friday’s saleyard sales, the National Livestock Reporting Service quoted the restocker, Merino and light lambs categories as slightly improved, while trade and heavy lambs were lower. The NLRS Eastern States Daily Indicators for lamb, their daily and weekly changes were: restocker 560c/kg, up 2 cents, up 9c; Merino 508c/kg, up 1c, up 46c; light 529c/kg, up 2c, up 21c; trade 551c/kg, down 1c, down 2c; heavy 555c/kg, down 2c, down 5c. The national trade lamb indicator closed down 2 cents at 551c/kg, and the heavy indice was down 2 cents to 555c/kg.

The ESDI and national mutton indicators both finished the week on 312c/kg, representing a 17-cent jump for the eastern indicator.

AuctionsPlus market operations officer Anna Adams said the first week in February is looking fresher with scattered rainfall and high numbers in online eastern states Sheep sales. Last week’s offering of 45,157 sheep and lambs, was 11,642 up on the previous week.

Merino wether lambs were scarce, with the top price coming from South Australia, Ms Adams said. The tidy Rednor blood line of unshorn April-May drop wethers weighed 17.5kg cwt, were mostly score 1 and 2, and made $85 at Bowhill, South Australia.  A line of 210 16-17 month-old early January shorn Merino hoggets, 57.3kg lwt and mostly score 2 and 3, sold for $115 at Barham, NSW. The average for this category was $73.50.

Large number of young first cross ewe lambs were offered online last week. At Trangie in NSW, an exceptional line of 630 7-8 month-old late November shorn lambs by Super Border rams sold for $192.50. The unjoined lambs weighed 57.8kg lwt and were mostly score 3 and 4. A line of 290 April-May drop late September shorn first cross ewe lambs sold for $178 at Ariah Park in NSW’s Riverina. They weighed 55.7kg lwt and were mostly score 3 and 4. The average price for this category was $121.50 which was down from last week, but the much higher supply this week resulted in more price elasticity, Ms Adams said.

The annual Petali White Suffolk and Poll Merino Ram Sale last Thursday sold White Suffolks to $3200 and the Poll Merino to $4600. The Amarula Dorper 13th Annual Production Sale at Glenavon, NSW, sold a ram for $7,000 and averaged of $1940.

Sheep quality continued to be mixed and most were Merinos. Prices lifted slightly, with Merino ewes making $78-$112 and crossbred ewes $74-$96.

Quality improved in the heavy lambs, which were very well presented. Mainly heavy weights were penned and trade lambs were slightly limited in supply. There were some good runs of store lambs. An extra buyer joined the usual field. Competition was solid resulting in a firm to dearer market with trade lambs experiencing the most gains.