Some of the stolen sheep recovered after being shorn in NSW.

DOHNE sheep stolen from near Orange a week ago have been found shorn after a post on the Rural Crime-NSW Police Force Facebook page was shared more than 200 times.

About a week ago police posted a report on the page about the theft of 100 woolly Dohne ewes from Dry Creek Road, Lewis Ponds, just west of Orange in New South Wales. 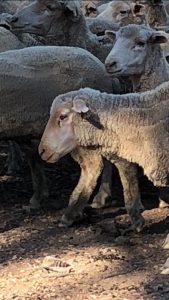 Some of the stolen sheep recovered at Tomingley.

After the post was shared more than 200 times, reached over 21,000 people and was featured in the mainstream media, most of the stolen sheep were recovered shorn and wandering on Gundong Road, Tomingley.

NSW Police thanked social media readers and said while it has not been confirmed, they believe the interest in the theft on social media and subsequent media attention has influenced the offenders to dump the livestock.

Police said the theft occurred sometime between the 30 March 2019 and the 11 April 2019.  About 8:30am on Saturday 20 April, most of the sheep were found walking on Gundong Road, Tomingley, about 15 kilometres east of the Newell Highway. This is more than 150 kilometres north-west from where they were stolen.

Police were notified of the discovery and attended the property to find sheep consistent in appearance to the 100 sheep stolen near Orange. The ear tags had been removed and the sheep had been shorn after they had been stolen.

Rural crime investigators have confirmed that the sheep found represented most of the mob stolen from Lewis Ponds. However, there are still a number of sheep outstanding.

State Rural Crime Co-ordinator, Detective Inspector Cameron Whiteside said police are committed to recovering the outstanding sheep and investigators have made a number inquiries in the area over the weekend, and continue to do so.

“We are confident that there is more than one person responsible for this theft, and that there are people out there that know exactly what has taken place.

“We encourage those people to contact us,” he said.

“If you saw anything suspicious in these areas, Tomingley, Lewis Ponds and surrounds, we want to hear from you.

“Perhaps you may have innocently shorn the sheep, received the wool or have knowledge of those that were involved, Detective Inspector Whiteside said.

“Whilst it is a positive that the majority of the sheep have been recovered, we strongly urge those involved to come forward before we knock on their door.”

If anyone has any information could they please contact their local police or Crime Stoppers on 1800 333 000.