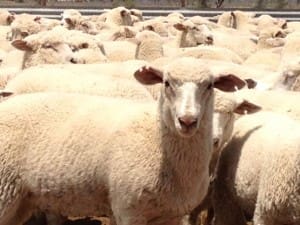 SLAUGHTER lamb prices generally eased on quality at most eastern states saleyards early this week, but were underpinned by strong restocker and feeder competition.

Rates held relatively firm In Victoria as new season yardings increased, but buyers are now able to be more selective, discounting secondary lambs and dry skins. Hamilton, Bendigo and Ballarat yarded a combined total of more than 95,000 lambs on Monday and Tuesday as conditions dried out.

The National Livestock Reporting Service said meat buyers at Bendigo reported a slight correction in skin values this week, with most working on returns of $6-$11 depending on size, dryness and seed damage.

The ESDI for mutton was down 1 cent to 326c/kg and the national indicator lost 1 cents to 325c/kg.

The NLRS said lamb quality was plainer. Heavy lambs were in short supply and most were trade weight or lighter. There were good numbers of Merinos and Dorpers. Light processing lambs sold to a dearer trend, while trade and heavy lambs were cheaper.

The NLRS said lamb quality was very mixed, with a fair supply of well-finished young lambs and some good quality heavy weight old lambs. There was a limited drafts suitable to restockers. Market trends varied along with quality to be mostly cheaper.

Young lambs sold to the trade were $3-$5 cheaper, with the heavier weights most affected. Secondary quality young lambs followed a similar trend. The heavier old lambs also sold to a cheaper trend, down by $3-$4. Lighter weight old lambs sold firm to slightly dearer, mostly around quality.

There was a good percentage of well-finished medium and heavy sheep carrying varying skin values, from bare shorn to a line of almost full wool Merino ewes. Market trends were generally dearer for the improved quality penning.

Numbers remained fairly similar this sale. Lamb quality was reduced slightly from the previous sale, with an increased percentage of lambs showing the effects of the warmer drier weather. The usual buyers were present and competing in a cheaper market. Light new season lambs slipped $4, selling from $100-$107. Trade weights sold $4-$5 easier at $115-$128. Heavy lambs sold from $132-$150.

The NLRS said there was some reasonable quality in the first-draft young lambs coming in from southern grazing areas, but most showed the effects of the dry conditions. The usual processing orders operated, although demand was selective and not all buyers operated at capacity. Price averages for export and trade weight slaughter lambs were similar to the previous sale, with just slight increases recorded for some of the better quality heavier lambs which were in limited supply.

Lightweight kill lambs and young lambs sold to restockers trended a few dollars easier. The market reached a top of $162 for a pen of extra heavy young lambs from Seymour estimated at 30-32kg cwt. The supply of heavy young lambs remained limited, with four pens of export types, over 28kg cwt selling from $150-$155 and just the one sale at $162. The best pens of heavy trade lambs in the 24-26kg cwt bracket sold from $126-$142, while the general run of domestic lambs made $105-$120. More shorn lambs are appearing and the best quality trade weight types sold from $122-$140. On a carcase basis, the heaviest lambs were averaging an estimated 485-495c/kg, while the nicely presented trade types were around 500-510c/kg, with select pens higher.

Processers secured more of the light lambs this week at $76-$96 for most. Restockers paid from $90-$107 for bigger framed store lambs, including recently shorn types, with smaller restocker lambs generally making $60-$88.

Sheep prices were softer, despite the 30 percent fall in numbers. Heavy crossbred ewes and Merino wethers supported by local restockers held their value the best, with most classes of trade and light mutton easing by $2-$8. Heavy crossbred ewes sold from $82-$104, while a run of Merino wethers nearing full wool sold to restockers for $109.60. Most trade weight ewes sold from $60-$85 and light sheep made $30-$58. The general run of mutton ranged from about 280-320c/kg cwt.

Quality very good, although there were more plainer young lambs showing less weight and more dryness in their skins compared to the last two Wednesday sales. More store lambs were yarded and made up at least 35pc of the offering. A near full following of buyers and some extra restocker buyers attended.

Lamb prices overall showed a cheaper trend. Extra heavy lambs sold $3-$4 lower, while heavy trade lambs were $6-$8 easier and in some places up to $10. Medium trade weight lambs were $4-$6 cheaper.

Light lambs sold to stronger demand, fluctuating from unchanged to $5-$7 dearer during the market, but lifted $10-$12 after the advertised store lambs were sold at the end of the sale. Successful store buyers travelled from Horsham, Deniliquin, Shepparton, Swan Hill, SA, and locally. The 1 score lambs sold from $39-$70 and the well-bred 2 score lambs made $74-$104, or 530-590c/kg cwt.

The NLRS said lamb quality was average to good, with all weights and grades offered. Reasonable numbers of heavy lambs were penned. The regular buyers operated keenly in a generally firm market.

The better presented trade weight lambs sold firm to a few dollars better and the heavy lambs were $2-$5 easier on last week’s high levels. The market reached a top of $164, with 4 pens selling over $160, and a dozen pens selling above $150.

There were good numbers of feeder and restocker lambs which sold to strong competition, ranging mostly from $82-$118 for heavier lines and $30-$70 for lighter lots. Good numbers of shorn young lambs are being yarded and they sold mainly to restockers for $78-$114, or from $86-$119 to the trade. Light weight 1 and 2 score lambs sold from $70-$83.

The sheep yarding included all weights and grades, with some well-presented runs of heavy sheep. The usual buyers attended, but not all operated fully. Sheep generally sold around firm, with some better Merino wethers selling to $108 to be a few dollars dearer. Medium weight wethers sold a few dollars easier.

The NLRS said it was generally a poor quality yarding of crossbred and Merino lambs that sold to solid trade and processor competition. All the usual buyers attended, but a couple of large processors did not operate.

The NLRS said a much smaller field of trade and processors, as well as restocker buyers, attended the sale and not all were fully active. Lamb quality fell away and there were only a few pens with weight and condition to attract trade support. Most of the yarding lacked finish and showed dryness in the skin. More shorn lambs came forward as prices were generally easier.

The NLRS said harvest and difficult weather conditions dropped numbers about 10 percent. Lamb and ewe categories made up the majority of the yarding. Prime lamb supplies were limited, with most drafts being shorn light weight and trade weight categories.

Prices for most categories were firm to slightly dearer, with processors and restockers active. Rates for light weight lambs suited to air freight markets increased due to competition from restockers. Light store lambs sold restockers made $20-$76 to be dearer by $5 or more. Light lambs sold to processors for $60-$95, up to $8 dearer. Trade weight drafts sold from $89-$123.50 to be firm to $5 dearer. Carcase weight prices ranged from 480-570c/kg. A very small number of heavy weight lambs made $110-$120.

Ewe weight and quality was down on last week with more very light and light drafts offered. Processors and restockers were active and there were no live export orders. Ewe weight and skin values decreased this week, but prices were maintained, driven by solid restocker competition.

Wether prices eased marginally due to a lack of live export demand. Better weight bare shorn wethers made $80-$92 and a few carrying a solid fleece made $107. Lighter weight and store wethers sold from $55-$82 to be close to firm. Rams lacked competition, with ram lambs making $65-$85 and young drafts sold to export feeders from $30-$60. Old rams sold to processors for $15-$30.