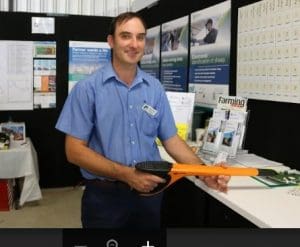 INVESTMENT in technology for the sheep industry can deliver returns of more than $25 for each dollar invested, according to a new study.

Technologies ranging from water monitoring to weight-based drench applicators are among the best five innovations for sheep producers.

A project by the WA Department of Primary Industries and Regional Development was set up to evaluate a range of technology and devices which can save producers time, money and effort.

DPIRD research officer John Paul Collins told delegates at LambEx in Perth this week there were five pieces of technology which could make a positive different in streamlining sheep management.

The cost-benefit ratio was highest for the weight-based product applicator, which would return $25.80 for each $1 invested and would pay for itself in a year.

Mr Collins said traditionally sheep producers drenched according to the heaviest animal in the mob, which posed a risk of some receiving non-optimal levels of drench.

“This problem can be avoided by using a weight-based product applicator which delivered a precise quantity of drench, vaccine or backline, calculated on the animal’s individual weight,” he said.

“Savings were made by reducing the amount of animal health products used – drench, backline and vaccine.”

The case study which tested EID involved a flock of 16,000 Merinos joined to a mix of Merino and White Suffolk rams. Merino ewes were first tagged with electronic tags in 2015, which allowed ewes to be ranked into various flocks according to their joining and performance.

“The purchase of the EID equipment and ear tags was approximately $27,000 with an annual cost of $20,000 in analysis fees, ear tags and labour,” Mr Collins said.

“The investment into EID has allowed sheep to be managed objectively.”

Remote cameras used for monitoring proved to be a major cost and time saver for the producer, who used it to monitor watering points.

The study showed the cameras saved the farmer $21,400 a year in labour and vehicle running costs which were now not needed to monitor water troughs on the 10,000ha farm.

“Previously the trough inspection over summer and autumn required a 400km round trip two to three times each week at a cost of $565 a trip for labour and vehicle costs,” Mr Collins said.

Remote cameras were installed at troughs accessed by sheep and the cameras took images on a set schedule.

The images were then available to the producer via the mobile phone network, the cloud and an app.

A DNA Flock profile test costs about $800 and the payback period for commercial producers is 18-24 months as long as the information is used to make better genetic decisions.

Scanning for multiple lambs is a well-accepted strategy to improve reproduction rates, Mr Collins said, but it was also important to know how many lambs were reared.

A commercial lamb producer tested the technology to match lambs to their mothers. The technology is also considered useful to stud breeders to determine maternal pedigrees.

“While the payback time for the proximity sensors to determine maternal pedigree and ewe profitability was much longer, it has big potential in the future as it could be assumed that costs will come down,” he said.

A video that highlights the benefits of five new technology innovations being adopted by Western Australian sheep producers had its premiere at LambEx 2018.

The video is the culmination of a project by the Department of Primary Industries and Regional Development to evaluate a range of technology and devices to save producers time, money and effort.

The video features five case studies that gave an insight into individual experiences with different products that benefit other producers.

The ‘Five technology infusion for sheep producers to consider’ video and supporting economics will be available at agric.wa.gov.au/sheeptech soon.