Sheep producers – can you spare a few blowflies for flystrike research? 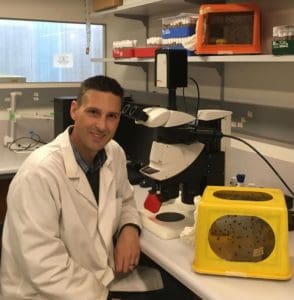 As part of research to potentially develop a vaccine protecting sheep from flystrike, University of Melbourne researchers Dr Trent Perry and Dr Clare Anstead are seeking adult blowflies from properties across the country.

University of Melbourne researchers recently identified the genes unique to the green Australian sheep blowfly, Lucilia cuprina. Now they want to identify if any of the genes – that encode potential target proteins in fly larvae – might hold the key to killing maggots with a vaccine given to sheep and lambs.

To continue the Australian Wool Innovation-funded project on the genetics of parasitism, University of Melbourne researchers want sheep producers across the country to trap, collect and send in 30 adult blowflies.

“It will be really helpful to have as many people involved with collection as possible,” Dr Anstead said.

Researcher Dr Trent Perry said following an article in AWI’s December edition of Beyond the Bale, a few producers have responded, but blowflies are needed from across the country to survey the extent of “candidate” fly genes that might be vaccine targets.

“We are still looking for anybody who is interested.

“We would be really happy to take flies from people in flystrike problem areas, but also from outside those areas,” he said.

“At the moment we’ve been doing work on what genes might be important in the development of larvae and that might be useful as vaccine targets because they might be presented on the outside of the insect or secreted.

“So antibodies generated by sheep that have been vaccinated might possibly be able to bind to them (the proteins) and impact development,” he said.

“But the reason we are really interested in this survey is that obviously for the vaccine to work, the gene that it is targeting has to be very conserved across the country; to make the vaccine as usable as possible everywhere.

“So what we are looking for here is of the (gene) candidates that we think look like they are going to be useful to pursue, whether or not there is any variation in those,” Dr Perry said.

“And if there is too much variation or there is variation at the sites that we think are important for them being acted upon by the host (sheep’s) immune system, then we will discard those.

“Before we push any further and things get expensive, this is a much better way to sift through our candidates and make sure that what we are pursuing will be the most versatile in all states across the country.”

No potential vaccines have been tested, but researchers are developing technology to test the vaccine concept. Researchers will extract DNA from any consigned blowflies and perform whole genome re-sequencing on the pooled DNA.

“The next stage is to try to demonstrate that if you impact that target gene in the blowfly that then affects the larvae’s development and will make them less able to establish a strike,” Dr Perry said.

Data from the fly gene survey would also be available for future work to assess the genetic makeup and gene flow through blowfly populations, he said.

Researchers want sheep producers to make contact before collecting blowflies and are prepared to send fly traps to anyone interested. It is anticipated that the trapping/collection would need to take place during the current flystrike season. Only one or two different collections from an area will be required and flies do not need to be kept alive.

Researchers will liaise with participating producers on the best ways and requirements to trap/capture the 30 blowflies, and on courier arrangements to dispatch blowflies to the University of Melbourne. 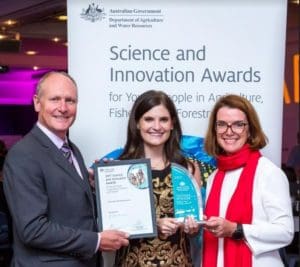 In 2015, an international research team, led by the University of Melbourne, in partnership with the Baylor College of Medicine Human Genome Sequencing Center, and funded by the United States National Human Genome Research Institute and AWI completed mapping of the blowfly genome.  Last year Department of Agriculture and Water Resources chief scientist Kim Ritman presented the AWI Award at the 2017 Science Innovation Awards to Dr Anstead, in recognition of the blowfly genome breakthrough.

Please email Dr Trent Perry at University of Melbourne at [email protected] if you are interested in collecting blowflies for the research project or for further details.