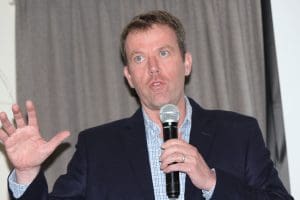 AUSTRALIA’S sheep producers and processors have welcomed the signing of an interim trade agreement with India that is set to eliminate tariffs on wool and sheep meat.

Under the interim agreement, there will be also be an elimination of Indian tariffs on Australian wool from entry into force of the agreement.

“AMIC has been focused on achieving this fantastic outcome for the benefit of our sheep processing members and exporters, for a very long time.

“This deal is a testament to the quality and desirability of Australian sheep meat across the world, and we are excited to be able to add to the growing list of satisfied global consumers who demand Australian red meat,” he said.

AMIC chief executive officer Patrick Hutchinson said the council has been working exceptionally hard behind the scenes in its advocacy efforts with a wide range of stakeholders to ensure there is a concerted effort in pursuing market opportunities in India.

“What has been achieved is a clear outcome of what can be done when industry and government work closely together to maximise market opportunities.

“This fantastic deal will give us added market longevity and market mix, in a diversified portfolio of new and emerging markets, as well as mature markets where we have existing strong commercial relationships,” he said.

WoolProducers president Ed Storey said the immediate removal of tariffs on wool going into India is an exciting development in trade relations for the wool industry.

“We hope to see an immediate impact of the removal of these tariffs from our market,” he said.

WoolProducers said it provided a confidential submission to the Department of Foreign Affairs and Trade in December last year requesting an Australian-Indian Free Trade Agreement that was beneficial to the Australian wool industry, seeking duty-free, quota-free access for wool into this important market.

“WoolProducers’ submission outlined potential benefits to the Australian wool industry under an IA-CECA, including market expansion due to the complementarity between our industry and India’s existing textile industry,” Mr Storey said.

India is a significant market for Australian wool, with India in recent times being the third largest single-country importer, however, was hit hard by the Covid-19 pandemic resulting in an initial 30pc drop in the value of India’s domestic textile and apparel market.

“In recent times we have seen India become more active in the Australian wool market, with an 82 percent year-on-year increase in volume being purchased between July 2021 to January this year, we believe that this agreement is therefore ideally timed,” Mr Storey said.

WoolProducers said a healthy and mutually beneficial relationship between the Australian and Indian wool and textile industries will benefit not only the Australian wool industry, but all Australians through the significant contribution wool, and the whole of agriculture, can deliver to our nation through a strong trading relationship supported by the CECA.

“We’d like to thank Minister Tehan and his team for delivering this important agreement,” Mr Storey said.

“The removal of the 2.5pc tariff will create even more demand for Australian wool.

“India is the third largest importer of our wool,” he said.

“China is number one and then Italy which is only slightly above India.”

“That is 4.5pc of the national clip and an 82pc rise on the previous year.

“In recent times we have noticed strong demand for the trade especially in the wools of 17.5 to 21.0 micron wools.”

Prime Minister Scott Morrison said the agreement would create enormous trade diversification opportunities for Australian producers and service providers bound for India, valued at up to $14.8 billion each year.

“This agreement opens a big door into the world’s fastest growing major economy for Australian farmers, manufacturers, producers and so many more,” the Prime Minister said.

“By unlocking the huge market of around 1.4 billion consumers in India, we are strengthening the economy and growing jobs right here at home.

Tariffs will be eliminated on more than 85 per cent of Australian goods exports to India (valued at more than $12.6 billion a year), rising to almost 91 per cent (valued at $13.4 billion) over 10 years.

Australian households and businesses will also benefit, with 96 percent of Indian goods imports entering Australia duty-free on entry into force.

It is the government’s goal is to lift India into our top three export markets by 2035, and to make India the third largest destination in Asia for outward Australian investment.

“This agreement will turbocharge our close, long-standing and highly complementary economic relationship in areas such as critical minerals, professional services, education and tourism,” Mr Tehan said.

“It will create new opportunities for jobs and businesses in both countries, while laying the foundations for a full free trade agreement.”

Benefits of AI ECTA include:

Sheep meat tariffs of 30 percent will be eliminated on entry into force, providing a boost for Australian exports that already command nearly 20 per cent of India’s market

Wool will have the current 2.5 per cent tariffs eliminated on entry into force, supporting Australia’s second-largest market for wool products.

Tariffs on wine with a minimum import price of US$5 per bottle will be reduced from 150 per cent to 100 per cent on entry into force and subsequently to 50 per cent over 10 years (based on Indian wholesale price index for wine).

Tariffs on wine bottles with minimum import price of US$15 will be reduced from 150 per cent to 75 per cent on entry into force and subsequently to 25 per cent over 10 years (based on Indian wholesale price index for wine).

The resources sector will benefit from the elimination of tariffs on entry into force for coal, alumina, metallic ores, including manganese, copper and nickel; and critical minerals including titanium and zirconium.

LNG tariffs will be bound at 0 per cent at entry into force.

Tariffs on pharmaceutical products and certain medical devices will be eliminated over five and seven years.