South Australian Merino and White Suffolk breeder Andrew Michael was among several wool growers and sheep meat producers who went on the tour across China earlier this year and visited major Chinese wool topmaker and scourer Tianyu Wool as part of a tour of Shanghai, Inner Mongolia and Singapore.

During the panel session chaired by ANZ’s head of agribusiness insights, Michael Whitehead, Mr Michael told the lunch audience, including Liberal Member for Wannon Dan Tehan, he was frustrated that not all of the 2018 EY Performance and Governance Review recommendations had been implemented. He also said Australia risked losing wool and meat markets if it did not mandate pain relief for mulesing,

Last month AWI chief executive officer Stuart McCullough said that 12 months after the release of the Ernst & Young 2018 Review report, AWI had achieved an “overall implementation rate” of 76 percent for the 82 recommendations and claimed industry consensus on key recommendations.

“In March this year, AWI and wool grower representative groups reached consensus on the company’s response to five recommendations in the ROP that involve proposed changes to AWI’s constitution relating to its democratic election model.

“We agree with industry that these proposed changes to the AWI constitution are in the best interests of Australian woolgrowers and should be put to shareholders at our 2019 and 2020 annual general meetings,” he said.

“As reflected in our implementation road map and in AWI’s new strategic plan, we are committed to continuing to listen to and consult with industry to ensure we meet the expectations of wool growers, our levy-payers, wool grower representative groups and government.

“Our plan provides a clear blueprint for continual improvement to the organisation.”

However, it is not clear if this implementation rate refers to AWI action on recommendations rather than implementation consistent with, and as specified by the review report. AWI has negotiated changes to several of the recommendations with wool industry groups and the Department of Agriculture on the pretext the results were consistent with the intent of the review, often delaying implementation past suggested review timelines. Key recommendations relating to director tenure, the board nomination committee, proxy declaration, director independence and election nominee signature requirements are scheduled to go to shareholder votes at the 2019 and 2020 elections. Industry groups have not yet agreed with AWI on the review’s call for a 10-year director tenure cap. 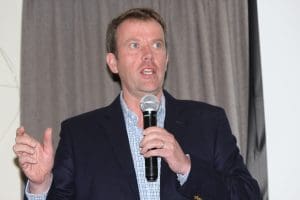 Mr Tehan made no comment about the EY Review at the lunch, but said the Federal Government needed to hear a united industry position on animal welfare and the issue of pain relief.

“It’s all very well saying government needs to lead, but it’s a lot easier, believe you me, when industry is talking with one for government than to be able to do its bit,” he said.

“So I put the challenge back to you, that we are happy to move, but it is a lot easier for us to do it with a united industry.”

Mr Tehan said the panellists insight had been incredibly valuable.

After the lunch, Mr Michael spoke with Mr Tehan and told Sheep Central he wanted a government commitment on full implementation of the EY Review recommendations and disclosure of the review’s cost.

“Because industry has paid for it and I have tried to get from Bridget McKenzie (Minister for Agriculture) how much it actually cost.

“Levy payers and tax payers need to know how much was spent on it, and if it is not going to be used, why did we do it?” he asked.

“As a levy payer and a tax payer, I want to know how much that EY Review cost and is this government going to implement it as (former Minister for Agriculture) David Littleproud said.

“I want to know are they going to do it or is that money again another review that has no credibility,” he said.

“It just frustrates me, I feel gypped that I spent a day of my time to go down there, and I was one of the people in the ‘Man in the Mirror’ incident that started all this, and zero has been done.

“I think that is why people feel they are not getting value with government or industry.”

Mr Michael said he agreed with Mr Tehan that the sheep industry had to be unified on mandating pain relief. The breeder said he was frustrated that some peak industry council could not decide whether pain relief ‘must’ be used or that it be mandatory.

Mr Michael said although it he had only heard that just 12 of the EY Review recommendations had been fully implemented, he wanted to see some evidence or clarification of what had been done, especially on the seven or eight “non-negotiable” recommendations.

Australian wool supply and mulesing are concerns in China

At the ANZ breakfast, Lachie Seears from the Boonderoo Pastoral Company at Lucindale in South Australia said Tianyu was concerned about the drought and drop in Australia’s flock, and the ongoing supply of wool.

“They are really concerned about how much wool we are going produce and whether we are actually going to produce enough to satisfy what their customers are demanding or expecting.

“And unmulesed sheep, that was something they were particularly concentrating on and wanted to make sure that we were going that way – I didn’t expect the unmulesed question.

Mr Michael said the unmulesed wool question is something that is “close to my heart”.

He said Leachim exported Merino and White Suffolk genetics to three countries and all around Australia, and mulesing was a massive issue.

“The issue is that we as an industry we haven’t addressed pain relief – it has got to be compulsory.”

Mr Michael said the producers were told Tianyu would not slow their mills down because of Australia’s lower wool supply, but the company could reverse their 80pc wool: 20pc synthetic fibre use, “if we don’t cease mulesing or have pain relief.”

“Pain relief is so important to our industry going forward.

“We can’t get any government leaders to put their hand up or our peak industry bodies and it is not just an AWI thing or an MLA thing or the peak bodies – it is a real issue and that’s what we learned overseas,” Mr Michael said.

“After the delegation finished, I actually stopped on and did some Meat & Livestock Australia work (as an MLA director) for three days and it (mulesing) is not just a wool issue, it is actually a meat issue as well.

“I spent time with the Hyatt there and their manager that does all the food for South-East Asia and he said the provenance, that story, animal welfare, is enormous,” he said.

“When we have the EY review that we all paid for, this really frustrates me.

“We all paid for the EY Review and out of those 82 subjects or recommendations I think there has been 12 that have been passed.”

“So we have to be strong and we have government reps here and if they don’t start to stand up soon we are going to find ourselves really in trouble with our markets overseas – I feel really strong about this.”

Hexham fine wool producer Zena Allen said one of here take home message from the trip was the change in fashion and what that meant for the fibre diameter of Australia’s Merino clip.

“For us, there is no need to go finer, I think that 18 microns and thereabouts, just a bit stronger, with the corporate fashion, they are not wearing suits as much, it is going out of favour.”

She saw Chinese women wearing coats made from carding wool and said technology was enabling the use of stronger Merino wool.

Mr Tehan could not be contacted for further comment today.