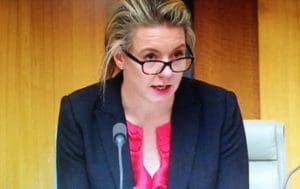 Ms McKenzie said today she wrote to the Rural and Regional Affairs and Transport Committee last month seeking AWI’s referral to the Australian National Audit Office over governance and financial issues raised at a Senate Estimates hearing in October.

The RRAT committee met in Canberra today and the ABC has reported that “multiple sources” have confirmed that AWI has been referred by the committee to the ANAO. However, Sheep Central has been unable to independently confirm the media reports.

An AWI spokesman said the company is aware of the media reports.

“AWI has not been advised of any inquiry or audit.

“AWI welcomes any review of its business operations, governance and the benefits we deliver to Australian wool growers,” the spokesman said.

RRAT committee secretary Jane Thomson said the committee has not made a public statement on the issue. Senator McKenzie said she cannot discuss committee deliberations and chairman, Queensland Nationals Senator Barry O’Sullivan, has been uncontactable today.

Senator O’Sullivan said in October that he was considering seeking an Australian National Audit Office investigation into the decision-making processes of AWI. He led a Senate Estimates hearing on Tuesday, where AWI chairman Wal Merriman admitted he had breached the body’s Code of Conduct and damaged the standing of the research, marketing and development company.

Mr Merriman also admitted he could hold up to half the potential votes in an AWI director election as proxies from wool grower shareholders. AWI is funded by compulsory wool grower levies and partly-matched Federal Government monies under a Statutory Funding Agreement with strict governance clauses.

The Senate Estimates hearing focused on AWI governance issues, board and election procedures, including the ‘man in the mirror’ incident involving AWI chairman Wal Merriman, the AWI leader’s election proxy and election powers and his recent confrontation with an ABC journalist.

ANAO audits at discretion of Auditor-General

The scope of ANAO audits are at the discretion of the Auditor-General, who has complete discretion in the exercise of his mandate, and cannot be directed on whether or not a particular audit is conducted, the way in which it’s conducted, or the priority given to any particular matter. The Auditor-General must, however, take regard of the audit priorities of the Australian Parliament, which are determined by the Joint Committee of Public Accounts and Audit. The Auditor-General also considers requests for audit at any time from members and senators of the parliament.

Public interest is also taken into account in determining audit priorities, and the ANAO can initiate work based on many factors including in response to requests from parliamentarians, parliamentary committees, entities and members of the public. ANAO audits are funded out of the existing ANAO budget allocation.

An AWI spokesman said the company is aware of the media reports.

“AWI has not been advised of any inquiry or audit.

“AWI welcomes any review of its business operations, governance and the benefits we deliver to Australian wool growers,” the spokesman said.