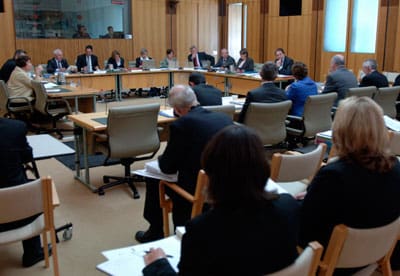 The Senate Committee conducting an inquiry into competition issues in the red meat processing sector has rushed out an interim report ahead of the pending Double Dissolution Federal election.

The committee has made five recommendations – listed below – but says it still has much more to say.

In rushing through an interim report ahead of the election the committee says it is trying to get some of its findings on the record while also advocating for an opportunity for the inquiry to be resumed in the next parliament.

The dissolution of the Senate and re-election of new Senators means the structure of committee could change dramatically in the new Parliament. All inquiries underway in the existing parliament will effectively be rendered redundant when this parliament is dissolved, and it will be up to the new Senate to decide which inquiries should be continued.

Beef Central understands there were significant divisions among Senators on the Rural and Regional Affairs and Transport (RRAT) committee as to whether it was worthwhile releasing a “half-cooked” interim report which covers only some issues and makes a handful of relatively vague recommendations.

The Senate Committee’s final recommendation acknowledges the fact this report is only part of the story by requesting the Government extend the inquiry until December 20, so it can produce a final detailed report and recommendations which will also include the findings of the ACCC investigation of beef and cattle markets, which should conclude in November.

The recommendations (and the committee’s explanatory comments for each) are as follows:

Recommendation 1: The committee recommends that a transparent pricing mechanism be introduced at livestock saleyards and that Meat and Livestock Australia (MLA) in cooperation with the livestock and red meat industry, establish a national price disclosure and reporting system.

The Senate Committee said the point was repeatedly made throughout the inquiry that the pricing mechanism in the cattle market in Australia lacks integrity at the saleyards and in over the hook sales.

The committee says retail prices have risen while livestock prices have not and that under current selling systems producers are unable to determine the true asset value of their stock.

The provision of information throughout the supply chain is essential to ensure producers receive the highest returns at the farm gate.

“It is clear to the committee that some form of price disclosure at saleyards is one mechanism which could address these challenges,” the committee said in the report.

“There is a requirement for a public and transparent pricing mechanism at the saleyards which at a minimum should display the price in a public location for all to see.

“Whether this mechanism is based on the Dutch auction system or another mechanism is a matter for the industry.”

The committee was also critical of the reporting of livestock sales at and beyond the saleyard, saying that “at best” market reports and benchmark indicators are based on a smaller and often cheaper sample of the market.

“It was highlighted to the committee that technology offers the opportunity to provide for an effective and real-time system which captures the full value of the carcass.

“The committee acknowledges that MLA is conducting an analysis of a price transparency system, and there are decisions that industry will have to make about this process and where it may lead.

“The committee notes, however, that there is a strong desire amongst producers for price transparency and that some form of price mechanism must be put in place.

“Therefore, the committee recommends that the industry move towards establishing a national pricing disclosure and reporting mechanism which takes into account all methods of sale.”

Recommendation 2 The committee recommends that industry and producers work together to establish best practice modeling for saleyard design in cooperation with producers and their representatives.

The committee said the inquiry underlined the importance of best practice saleyard design for the purposes of animal health and welfare as well as the safety and comfort of saleyard users.

“To this end, the committee recommends that the industry and producers work together to establish best practice modeling for saleyard design in cooperation with producers and their representatives.

“The study should identify best practice in relation to the physical construction of a saleyard including flooring which can be used as a guide for saleyard construction in Australia into the future.”

Recommendation 3 The committee recommends that the Australian Government introduce legislation to prohibit concerted practices as soon as practicable.

The committee said it has taken the view that a price transparency system, which reflects the true price of the cattle market, should be underpinned by “the real prospect of investigation into anti-competitive behaviour”.

It said it strongly encourages the Australian Government to implement the recommendations of the Harper Review and introduce legislation, which would prohibit ‘concerted practices’.

“Legislation in relation to concerted practices would not only bring Australia’s competition laws into line with those of other jurisdictions (such as the United Kingdom) but would assist in addressing many of the concerns raised regarding saleyard practices.”

The committee said it recognises a need for a nationally consistent training and registration regime for livestock agents.

It also believes the registration body should be responsible to oversight livestock agents and establish a formal complaints mechanism.

Recommendation 5 The committee recommends that the Senate extend the inquiry reporting date to 20 December 2016.

The committee notes that the ACCC market review report is due for public release in November 2016.

“While this interim report contains extensive consideration of the key issues, as well as significant recommendations, the committee signals its intention to advocate for the opportunity to consider the ACCC report and other matters listed at the beginning of this chapter in due course.

“Therefore, the committee recommends that the Senate extend the final reporting date for the inquiry to 20 December 2016.”

The committee report also noted that it still has “more to say on a number of important matters”, and intends to do so as soon as possible. These matters include:

Price disclosure;
Agents’ conduct and collusion;
Trimming;
Variations in grid inspections;
Standardisation of saleyard design and selling practices;
Reverse consolidation markets;
Agents’ owning saleyards in which they operate;
The adequacy of the Australian Competition and Consumer Commission’s (ACCC’s) powers to protect witnesses;
Processor consolidation, including the loss of competition and creeping acquisition;
Buying power;
The late setting of prices for cattle booked for sale;
Commission buyers;
The ACCC market study; and
The lack of a complaints mechanism for ‘over the hook’ grading.
To read the full interim report, click here