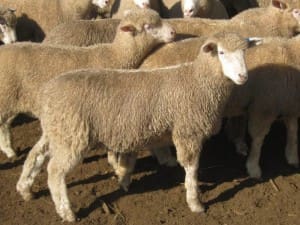 AuctionsPlus offered 17,500 store lambs last week, which sold for up to $106. More than 14,000 sheep and lambs were offered online in Victoria.

The ESDI for mutton and the national indicator both closed on 331c/kg.

Merino wether lamb prices were back to an average of $69 this week, ranging in price from $53-$83.50, with the top price paid for a large line of 910 woolly April-May drop lambs at Priarie in northern Victoria, weighing 15.7kg cwt and mostly score 2. Wether hoggets sold from $66.50-$90.50 to average $78. The top-price was paid for a line of 900 17-18 month-old mid-September shorn wethers at Melville Forest in southern Victoria that weighed 22.8kg cwt and mostly score 2s.

The NLRS said lamb quality was good, particularly for the shorn new season lambs, which were well-finished. Mainly trade and heavy weights were penned, along with a good run of store lambs suitable for restockers. All the usual buyers operated and competition was solid, resulting in a firm market.

Light lambs bought by the processors held firm and averaged $109, while store lambs mostly ranged from $94-$107, up $1. Medium and heavy trade weight new season lambs were firm and averaged 540c/kg cwt. Most of the quality heavy trade weight lambs sold from $120-$130. Heavy weight lambs were firm to a couple of dollars dearer and ranged mostly from 530-548c/kg. A pen of extra heavy weight shorn new season lambs topped at $160, with an estimated carcase weight of 28kg.

The NLRS said lamb quality was very mixed, with some better finished lambs offered, along with those showing the effects of the warmer drier weather. Not all the usual buyers were present to compete in a fairly steady market.

The NLRS said lamb quality remained very mixed, with most pens showing dryness and seed in the skins. Not all the regular processing orders operated, but the lamb market was firm to dearer.

The best gains were made by the better quality heavy trade and export young lambs, which were in limited supply. The market reached a top of $148. There were only a few pens of heavy young lambs which sold from $134-$148. These lambs were estimated to have made 490-520c/kg cwt and averaged over 500c/kg. The plainer finished domestic lambs generally sold from $105-$118, with most sales similar to last week.

There was solid restocker demand from Corowa and the local area and the general run of store lambs, 15-18kg cwt, were firm to slightly dearer at $83-$99 for most. The market showed a noticeable price increase for bigger lines of up to 200 head of very young and small lambs under 14kg which sold from $65-$73.

The sheep market was firm to a few dollars dearer across most categories. A well-presented line of Merino wethers, estimated at around 27kg cwt, sold for the top price of $100. Heavy crossbred and Merino ewes sold from $75-$94.50.