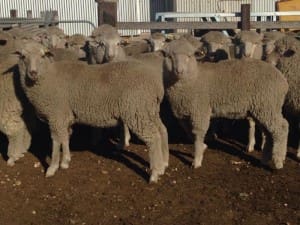 LAMB prices continued to weaken in saleyards across the nation this week, dragged back by increased yardings, direct consignments and declining quality as conditions get drier.

Only the heavier of the light new season lambs, up to 18kg cwt, sold at 600c/kg or better early this week, with the lighter lines often making less than 400c/kg.

Victoria’s public holiday on Friday and the New South Wales break on Monday cut the number of centres selling, but most that sold over the two days yarded more lambs than the previous week.

The various factors meant the increased numbers of restockers and discerning trade buyers all paid less for their lambs. Restockers from Victoria, Tasmania and New South Wales were active at Bendigo this week.

The NLRS did not quote trends for the Eastern States Daily Indicators for lambs this week, but most categories fell, building to weekly falls of 25-40 cents.

The ESDI for mutton finished on 308c/kg, representing a 38-cent fall in the past seven days, and the national indicator is on 302c/kg.

The NLRS said just under 15,000 new season lambs were penned and quality was very mixed. There were a few well-conditioned pens, but more lambs showed signs of dryness. The usual buyers were active, along with strong competition from restockers, and the market trended cheaper overall.

The NLRS said 6243 young lambs were yarded, with quality a little plainer again as more start to show dryness and seed. Some processing orders were absent and the sale showed a much weaker trend in comparison to a fortnight ago and against more recent lamb markets.

Agents passed a few pens in and most that sold were at levels $12-$20 below the last sale held on September 22. The market reached a top of $126 for heavy young lambs estimated to weigh around 28kg cwt. The supply of heavy young lambs was limited, but demand was soft and only a handful of pens sold above $120. Most of the young lambs were 20-24kg cwt trade weights that mostly made $96-$118, or around 455-460c/kg cwt based on $7-$8 skins. Store lambs to restockers were also cheaper, with agents from Shepparton and the Bendigo area able to access more weight and size at $90-$105. Smaller and lighter store lambs held their value the best. There was only a token offering of 588 old season lambs which were discounted.

All weights and grades of sheep also sold weaker. Prices reached a top of $94.60 for heavy Merino ewes in a skin estimated at $25. Sales over $80 a head were limited, with most ewes selling from $50-$74 and light sheep down as low as $19. The better quality trade mutton was estimated at 220-270c/kg cwt.

The NLRS said it was Bendigo’s biggest lamb yarding yet this spring. Quality was plainer, with more drier-skinned light weight young lambs. For such a big yard, the selection of quality trade and export slaughter lambs was limited. The market was erratic and opened cheaper, before gaining momentum. Slaughter lambs over 20kg cwt sold $4-$7 cheaper, while lighter lambs to processors and restockers were mostly $6-$12 easier compared to the strong results of a week ago. The market reached a top of $146 for export young lambs estimated to weigh about 27kg cwt.

The supply of old lambs continues to dwindle and they were discounted, with only a few processors operating on them. There were only a few pens of heavy export young lambs over 26kg cwt, with just four sales above $140, to a top of $146. About 20 pens of heavy trade lambs made $130-$136. The general run of trade weight lambs sold from $114-$125, or 480-500c/kg cwt. However, the market was erratic, with higher and lower sales recorded. Restockers from Ballarat paid $106-$125 for bigger store lambs, with most sales to the paddock from $70-$90. Restocking orders came from Ballarat, Shepparton, Birchip, Horsham, Finley in NSW, Wodonga, Tasmania and the local Bendigo area.

The line-up of old lambs comprised mostly odd pen lots that made $69-$98, with only a few sales of better trade types to $110.

Not all buyers were active on the sheep. Extra heavy mutton was severely discounted by $20-$30, with ewes carrying excess fat the most affected. Pens of extra heavy crossbred ewes sold from $61-$80. The market reached a top of $91 for heavy Merino ewes in a big skin. Processor demand for leaner trade sheep was more robust, but they still averaged cheaper than a week ago. The better quality trade mutton made an estimated 280-320c/kg cwt.

Ballarat lambs up to $10 easier

The NLRS said young lamb numbers increased and quality was average to good, with reasonable numbers of trade weight and heavy lambs. The usual buyers operated in a cheaper market with lambs generally selling from $2-$8 and up to $10 easier.

Large numbers of lighter lambs were penned suiting restocker, feeder and processor orders. Restockers and feeders paid mostly from $81- $109 for light trade lambs and from $58-$73 for lighter lots.

The NLRS said the crossbred and Merino lambs sold to solid bidding from a full complement of trade and processor buyers, including limited domestic input. Many lambs were starting to display dryness and seed contamination. However, the lambs yarded were keenly sought by trade buyers and a large contingent of agents vied for the well-bred crossbreds at slightly dearer prices. New season Merino lambs were more plentiful and strong restocker interest, especially on shorn lambs, ensured prices lifted.

The NLRS said an extra processor joined the usual trade and processor buyers. A large number of restockers were active and provided strong competition for lighter weight new season lambs.

The NLRS said the effect of the warming and dry conditions was evident in the smaller yarding. Most lambs were lighter weight new season drafts, with many showing dryness and a few pens carried light grass seed contamination

All buyers were present, but a lack of live export orders led to easing prices for wethers and most other categories as most processors have solid direct supplies. Restockers took advantage of the reduced competition to secure lighter lambs and suitable ewes in larger numbers.

Ewe numbers reduced as did the quality, with more lighter conditioned and smaller frame drafts. Ewe prices were close to firm, with restockers active on suitable drafts. Light weight ewes made $35-$48 and 2 score medium weight lines sold to processors for $40-$63, or almost 225c/kg cwt. Heavy and better conditioned mutton sold from $45-$65 to be $2 cheaper.

Restockers purchased suitable mature drafts for $40-$69, with most around $5 easier. Ewe hoggets sold to a top of $82.50 for a well-grown draft suitable to join immediately.

Wether prices were mostly back $5 without live export orders. Export weight drafts made $78-$90, while a few with good skins made to $100. Lighter and store drafts made $63-$88 and were also back $5. Rams lacked strong competition and sold easier. Ram lambs sold to $77, with export feeders paying $30-$77 for suitable younger drafts. Old rams sold to processors for $5-$25.