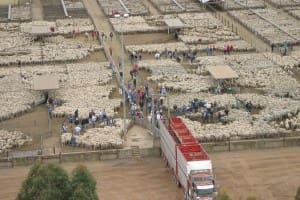 Lamb and mutton prices rose in saleyards across Australia earlier this week, as export and domestic processors competed more openly against each other for declining offerings of quality stock.

Agents said processors were delving deeper into available lamb supplies, were more prepared to take older lambs with finish and in many markets out-competed restockers on killable lambs.

Ballarat agent from TB White and Sons Gerard White said exporters were sourcing heavy lambs wherever they could because weight was limited in the lambs coming through.

In another indication of the quickly finishing season and the early turn-off of lambs, the NLRS said Hamilton yarded 227,000 lambs in November, compared to the 80,000 agents offered in the same month last year.

The National Livestock Reporting Service said the Eastern States Trade Lamb Indicator closed after Tuesday’s sales at 504c/kg, up 11 c/kg on Monday, and 34 cents ahead of the rate a week ago. The Merino lamb indicator at 449c/kg cwt, is 17 cents up on the day before and 65 cents higher week-on-week. The other ES lamb indicators are: restocker 489c/kg, up 6c; light 470c/kg, up 9c; heavy 503c/kg, up 9c. The ES mutton indicator is at 306c/kg, up 5 cents.

Saleyard rates mostly ahead of grids

Most processors also lifted their grid levels for lambs and sheep this week, but many abattoir lamb rates were still lagging behind carcase weight prices being paid in saleyards, which moved well over and up to 570c/kg for a domestic order at Ballarat.

In SA at Naracoorte, sheep prices reach 350c/kg, illustrating the strength of mutton demand when supplies are tight.

The NLRS said over-the-hook lamb prices lifted in all categories in SA this week, with trade and heavy weight carcases an average of 13c/kg dearer. Mutton rates remained unchanged week-on-week.

The NLRS said the very mixed yarding had a few good pens of heavy weight lambs and only limited numbers of ideal trade weights. White Dorper and Merino lambs, and hoggets were well-represented. All the regular buyers operated.

The NLRS said the quality of the lamb offering was fair to good with more young lambs than old. There was a good supply of well-finished lambs along with a few pens of plainer condition well-bred young lambs. The usual trade and export orders were in place and there was increased restocker competition. The best of the young lambs presented with more weight than the previous week, but the old and shorn lambs were lighter.

Well-finished trade and export weight lambs sold $3-$6 dearer and more in places with quality variations also having an effect on some price changes.

The reduced supply of sheep had a positive effect on the market with trends dearer through all classes.

The NLRS said lamb quality improved from the previous sale, with more well-finished lambs on offer. Heavy and extra heavy lambs were well-supplied. The usual buyers competing, along with restockers, in a dearer market.

In Victoria at the Hamilton saleyards on Monday, the agents yarded 18,018 lambs, 16214 than the previous Monday sale.

The NLRS said quality was again good, with all weight ranges represented, although lambs are starting to show more dryness in their skins. All the usual buyers competed, but there was less restocker activity than previous weeks. Overall this did not affect prices, however, with the upward trend continuing on the lambs.

The NLRS said lamb quality improved on last week, with more first draft young lambs from southern grazing areas. There were also some well-presented recently shorn lambs. Bidding from meat buyers on the top drafts of slaughter lambs was the most competitive the centre has seen recently and all lambs were dearer by about $6-$16. The best quality lambs displaying weight and finish experienced the biggest price gains, with bidding not as intense on the plainer bred and secondary pens. The market reached a top of $156.20 for a pen of shorn young lambs finished on bean stubbles that were estimated at 30kg cwt. It was one of three pens of heavy export lambs to sell for more than $150.

Processors dominated bidding on lighter weight lambs this week, with most selling from $75-$90 in a dearer result. A feature run of young Merino ewe lambs from the Riverina sold from $85-$112 to local north-east restockers at close to 500c/kg cwt. Well-bred pens of young shorn lambs received strong support, with a feedlot order also operating.

The lead runs of young slaughter lambs generally sold from $118-$135, with only limited sales above $140. Buyers were more selective on the plainer and drier skinned domestic lambs at $95-$115 for most. On a carcase weight basis the best slaughter lambs sold in an estimated range of 490c/kg-530c/kg cwt, with odd sales higher.

The sheep market was dearer, with a stand-out pen of extra heavy Merino wethers topping at $105.20. Heavy crossbred ewes sold from $82-$96, with the general run of medium ewes at $60-$80. The good quality sheep averaged over 300c/kg cwt.

The NLRS said there was a little more weight in the heavy lambs this week and competition was very strong. Most quality lambs sold generally from $5-$10 dearer and more on some selected lots. Some of the best of the trade weight domestic lambs sold to 570c/kg cwt. There were large numbers of lighter lambs suitable for both processors and restockers and they sold to keen competition, with restocking lambs selling from $73-$99 to be a few dollars dearer, while lighter lots sold from $26-$68.

Best trade lambs lift up to $10 at Dublin

The NLRS said the generally plainer quality yarding of crossbred and Merino lambs sold to strong competition from the usual trade and processor buyers. Many light weight crossbreds were yarded and feeder buyers from the Yorke Peninsula secured numbers at dearer prices.

The NLRS said the usual trade and processors attended along with a small number of restockers. Very few heavy lambs came forward, with the bulk of the yarding being light weight trade lambs. The market sold to a general dearer trend.

The NLRS said strong prices last week, harvest coming to a close and storms across the regions led to numbers nearly doubling this week. Quality across the yarding was much better, with good supplies of prime trade lambs and solid numbers of well-conditioned ewes. All buyers were active, with prices for most categories were firm. Prime trade and heavy lambs eased slightly from the numbers-driven highs seen in recent weeks, but still averaged close to 500c/kg cwt. Lighter weight and store lamb drafts were firm to slightly dearer with restockers, live exporters and feeders all competing to secure numbers.