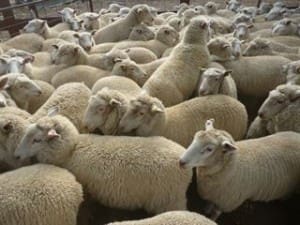 These 17.6kg cwt Poll Dorset cross lambs at Boorowa sold for $100 on AuctionsPlus this week

Charles Stewart and Co auctioneer Jamie McConachy said export lamb prices have been in a downward spiral for four consecutive weeks and he has been told the boxed lamb processors could not export is being sold onto the domestic market.

“Consequentially it has flowed onto the trade lamb job being a lot cheaper also this week, up to $20.

Mr McConachy said one Victorian exporter said it had never had “so much boxed lamb just sitting about.”

“And basically they are desperate to get rid of it and they are pouring it into the domestic market and consequentially yesterday they were hardly interested in buying lambs.”

He believed all the exporters were putting lambs onto the domestic market “to various levels”.

“So yesterday (Tuesday at Ballarat) was blood ugly.”

Mr McConachy said many of the lambs yet to be sold were on grain and holding them in feedlots was costing lot feeders every day.

“They’ve been feeding them for that long now, in some cases they just want to sell them.

“All of a sudden as a result of yesterday, we are seeing blokes just wanting to hook their lambs, they are not interested in the marketplace,” he said.

“As a result of that, the hook prices yesterday came back 10 cents across the board.”

Farmers are now becoming angry that the delay at export and domestic processing plants to book their lambs in has extended out to two weeks, he said.

“Basically we are seeing blokes wanting to book lambs in, and sit and wait to get them killed over the hooks.

“I think you will see saleyard numbers cut back by possibly half next week.”

The seasonal and market forces meant processors were able to pull lamb prices back in saleyards mid-week, including in NSW where drafts are showing dryness from the seasonal conditions. Continued buyer pressure on lamb prices is also reflected in generally lower over-the-hook rates, especially in NSW and Victoria.

Mutton prices in some saleyards also came under pressure, especially where yardings increased.

The ES mutton indicator fell 2 cents to close on 356c/kg and the national indice was 355c/kg, a daily fall of 7 cents.

The NLRS said the quality of the lambs was fair to very good with trade and heavy weights well-represented. There were some fair quality crossbred lambs suitable for restocker orders along with the usual secondary quality lambs.

The usual trade buyers attended, but there was less restocker activity. The quality and weight of the restocker lambs was below that of last week and resulted in a downward trend in prices. The market trend for the good quality medium and heavy trade lambs was firm to slightly dearer. Export weight lambs sold to a cheaper trend, although the fall was minimal.

The quality of the sheep penning was fair to good with large lines of quality Merino ewes and wethers. The market for ewes to process was firm to slightly cheaper with the exception of a high quality pen of 3/4 wool, sound-mouthed Merino ewes purchased by a restocker. The market for Merino wethers was dearer with weight and quality being contributing factors.

The NLRS said lamb quality was similar to the previous sale with some well-finished and plainer pens. More lambs showed signs of dryness. The usual buyers competed in a cheaper market.

The NLRS said the quality of the trade weight and heavy lambs was good. There were also good supplies of lighter lambs suitable for processors and restockers. The usual buyers operated in a mostly cheaper market with heavier lambs easing $6-$10, while the better covered trade weights sold firm to $5 down on last week.

The NLRS said the generally very good quality yarding of crossbred and Merino lambs sold to easing competition from local and interstate trade and processor buyers, and one major processor failed to operate.

Feeder buyers were reluctant to bid with the same strength as recent weeks and they purchased late drop 2014 lambs at cheaper rates.

The NLRS said a large number of store lambs came forward to sell to strong restocker support and the usual trade and processor buyers also attended. Quality was mixed and prices tended to ease across the market.

The NLRS said quality was plain across the yarding with most of the lambs again lighter weight secondary drafts. All buyers were present but there was no live export activity. This affected lamb sales, with most prices slipping by more than $5.

Mutton prices started easier but improved in later sales, to finish firm to slightly dearer. Wether and ram prices were solid, though marginally easier than last week. There were some good medium and heavy weight ewe drafts, but were of lighter condition. Ewe prices finished on a high note after being cheaper earlier in the sale.

Light weight ewe drafts made $35-$62, with the 2 score mutton to processors making $55-$78. Better conditioned drafts, including the heavy weight supplies, sold from $64-$87, to be firm at close to 290c/kg cwt. Wether prices were marginally easier without live export activity. Export weight wether drafts to restockers and processors made $70-$98 and were slightly easier. Lighter weight and store categories sold from $55-$80, also back $5. Rams remained firm, with ram lambs selling from $60-$85. Young drafts to processors and export feeders made $30-$69 while old rams to processors sold from $20-$55.