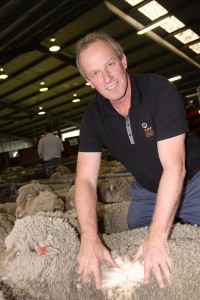 WOOL sale by description within a proposed Wool Exchange Portal would lead the industry on a path toward self-destruction, leading exporter Chris Kelly told growers at a recent sire evaluation field day in Victoria.

At the Elders Balmoral Sire Evaluation Group field day at Wannon, the managing director of Australian Merino Exports and president of the Australian Council of Wool Exporters said fine wool had become “just a set of measurements”.

“It can’t be described and the intrinsic physical attributes of the fibre have now been lost and they were the very attributes that made it so unique and usable in the processing and all the different products you can use it for.

Mr Kelly said the industry drive to breed Merinos growing more and longer finer wool, meant it had become less of a speciality fibre and more a commodity, difficult to differentiate and market.

“It’s hard to market a product that is not quite right.”

But he said there was a move among processors back to quality and the Australian industry needed to correct and produce wool for specific market segments.

“I agree the market signals have pushed us to where we are now, but now those very market signals are starting to push us back and are telling us that “enough is enough”

Mr Kelly said the recent attention on sale by description through the Australian Wool Innovation Wool Selling Systems Review was a path to self-destruction, while the current auction system with buyers looking at a bale of wool in a different manner set the market and competition.

“If you take that away from us, that one person that ultimately types it for the rest of the trade – what is his skillset, who is he buying for?

He is concerned that a move to sale by description might mean a loss of the ability to source specific types of wool for different customers, with even Chinese buyers creating niche types.

“I think it is putting far too much pressure on one person if he is going to type just a generic type like an MF5 MF4, and expect us, the people who actually buy the wool, to fund it, pay the claims if there is an issue…

“I think we are going down the wrong path and it is going to cause a lot of grief, so I hope common sense prevails and we move ahead,” he said.

Mr Kelly equated the review as an example of bureaucratic intervention in Australia’s wool selling system, similar to the failed reserve price scheme.

“So meddling in that will only cause us more pain.”

“We’re on the cusp of a really good time so let’s not throw it all out just because a certain section of the industry say it should happen,” he said.

“If they (AWI) haven’t got industry support it is dead in the water.

“If they are going to push us into a corner and not keep us informed then it is not going to win,” Mr Kelly said.

“It’s your money do what you want with it – if you want to go ahead and waste it with a sale by description mentality then you deserve what you get.

“I’m telling you that I hope common sense prevails – I’m not going to guarantee wool that I haven’t seen,” he said.

Mr Kelly said he had tried to show members of the WSSR panel the physical distinctions between two types of wool with similar micron, length and tensile strength figures, but they “just turned on their heels and walked away” when he told them the differences could not be tested for.

“So I just hope we move forward and do the right thing.”

Wool selling review was not “putting in” sale by description

“We are not putting in sale by description, but if you want to sell that way you should have the right, the option.

“If you want a low-cost way of selling wool – there are plenty of people in Western Australia who want to do that, they should be able to do that.”

Mr Cuming said AWI was not getting rid of the auction selling system with a wool sample displayed in a sample box.

“We are wanting higher transparency and we want to put buyer and seller together.

Mr Cuming said he sold his wool au auction a few weeks ago.

“I went down to see it, it was fantastic to see – but the 18 people sitting in that room were the only people in the world who bid on my wool and I still don’t know what it cost me to sell it.

“We want some full descriptions of what it costs, so let’s open up the trade and let’s bring it into the 21st century, but we are not getting rid of the sample box, that’s a definite,” he said.

When Mr Kelly asked AWI would guarantee it would not get rid of the sample-based system, Mr Cuming said: “That’s written in the report.”

“Sale by description is mentioned because it should be an option if people want to sell that way.”

Mr Kelly believes the WEP has now stepped outside its initial wool selling costs and competitive tension terms of reference into a campaign to establish the Wool Exchange Portal.

“We agreed to the initial review and were frustrated by some of the hidden costs in the transfer of ownership,” he said.

“I don’t know where it has come from – Wally (AWI chairman Wal Merriman) is frustrated with his fine wool, but why are you doing it?

Mr Cuming said there were more than 100 submissions to the review and it was conducted independent of the AWI board.

“It is opening up different ways to sell wool, it is not a push for sale by description.”

“Why not try and make it a little bit cheaper and why not bring seller and buyer closer together?”

Mr Kelly said he looked forward to the review defining the profits, costs and industry need for digital disturbance in the industry.

“We just don’t know where it came from.

“The auction might look old and antiquated but we walk in there with our computers – we’re live and it’s data transfer – the only time we lift a pen is when we walk into the sale room,” he said.

“Before that and after it, it’s all digitalised, all the transfers, all the broker invoices, move everywhere — it’s not old and antiquated as they say and it is not broke.

So if they are going to come up with a better idea, sell it to us first if you want to get us to accept and utilise it.

“We will look at it if it is good, but don’t ram it down our throat and don’t us that they’ve consulted everyone about the WEP, they haven’t,” he said.

“The WEP was dreamt up towards the end, after we had put all our submissions in.”

“That’s $10,000 I’ve just thrown in the air – are you guys going to do the same if they come up with this idea and the industry doesn’t support it?

Mr Kelly said AWI was “coming from a long way back” because the industry doesn’t want the WEP in its current format.

“They are going to have show us a lot more facts – a lot more data and then we might listen to it.

“At the moment they have got us up against the wall and they are just barging through – that’s alright, but if doesn’t work and it doesn’t get support don’t come crying to us.”

Mercado managing director Robert Hermann said the market analysis company put in a submission to the review and supported the idea that wool growers needed to know what costs were being allocated against your business.

“And that wasn’t the case – so there are costs against you selling wool that you don’t see, but it affects your prices.

“They were hidden costs, they weren’t transparent and that was the original way we read the Wool Selling Systems Review.”

Mr Hermann said the industry needed selling cost transparency because they have been increasing without being transparent.

“Where it is going I’ve got to say we’ve lost a bit of interest and lost a bit of touch with it because it doesn’t really affect us all that much.”

Wool grower and field day organiser Tom Silcock said he also put in a submission to the WSSR and first pushed for wool market reform 30 years ago.

“I think it is all about the two sides of the industry working together.”