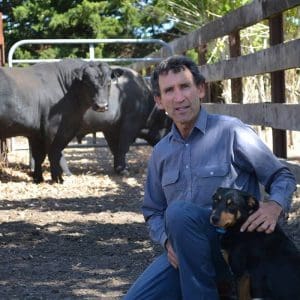 The prime lamb and beef farmer at Kalangadoo is campaigning for a nationwide ban on unconventional gas mining and also wants Australian research into the groundwater, human and animal health impacts of gas mining.

The film has already been shown in South Australia since its release, but he has received calls for film showings in Queensland, the Northern Territory, Western Australia and New South Wales.

He has enlisted the help of online film marketing platform Fan Force and brings his 67-minute film –featuring interviews with about 50 industry and academic experts, and farmers, in Australia and the United States — to Hamilton in south-west Victoria on March 21.

Mr Smith was a speaker at an Anti-Fracking Tractor Declaration Day in south-west Victoria last year and has since made two trips to the US.  He said he borrowed “a lot of money” to fund his travel and the resulting film because of his concern about the impacts of unconventional and conventional gas mining.

“I’m keeping my focus on trying to get an Australia-wide on unconventional gas.”

The film will be shown in Hamilton on Wednesday March 21 at the Hamilton and Alexandra College MPAC at 7pm.