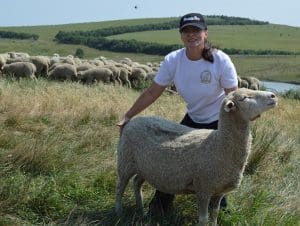 RUSSIAN scientists have reduced the fibre micron of the country’s main fine wool breeds by up to 2.4 microns and increased fleece yields by 1-3.6 percent since 2006.

Research has also allowed Russian breeders to approach the optimum ratio of bright wool yield and liveweight of the animal, and the country is now starting genetic studies into meat productivity.

Director of the All-Russian Scientific Research Institute of Sheep and Goat Breeding Marina Selionova will give Australian Merino breeders an insight into the Russian Merino industry at for Australian farmers at World Merino Insight Global Merino Unity Conference on September 6.

The Merino remains a key part of the 25 million Russian sheep flock and despite a drop in overall flock numbers due to economic reforms in 1990, research continued into wool and sheep meat productivity in the Merino breed, Dr Selionova said.

“Since economic reforms in Russia in 1990, there has been a significant reduction in Merino sheep … in that period fine wool sheep breeding made up 90 percent of the flock, while at the present time it’s only 56pc,” she said.

The main sheep breeding regions in Russia included the North Caucasus and the South, with breeds including the Grozny, Soviet Merino, Stavropol, Dzhalginsky Merino and Caucasian. 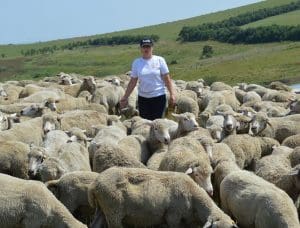 Australian genetics from studs such as North Ashrose, Haddon Rig, Bungaree, Collinsville, Uardry, Barton Hill, Roseville Park and Anama have been used to improve Russian Merinos in these regions.

Dr Selionova said another sheep breeding region was the Altai and Western Siberia, Zabaykalsky Krai, Buryatia, with the two key Merino breeds being the Zabaykalskaya and Kuludinskaya, being able to produce quality wool and survive in temperatures that ranged from 40C degrees below zero to 40C in summer.

“This is truly worthy of the Guinness Book of Records,” she said.

Scientific support of the sheep industry was conducted by the institute that Dr Selionova worked for, the All-Russian Scientific Research Institute of Sheep and Goat Breeding.

“The institute coordinates work in the field of sheep and goat breeding of 30 scientific and scientific-educational institutions,” she said.

“It is known that Russia was the first to develop the method of artificial insemination and technology of using cryopreserved gametes in the reproduction of farm animals.

“This discovery, and the need to maximise the use of ram semen of Australian selection, repeatedly imported into Russia between 1970 to 1990, have become the rationale for establishing a gene pool cryogenic bank within the institute, which contains more than 70,000 doses of ram semen from 12 breeds.”

Dr Selionova said it was an essential part of selection to be able to test breeding stock on quantitative and qualitative indexes of wool productivity.

“Testing and individual selection of rams and ewes over this eight-year period has allowed us to reduce the fineness of wool in the main fine wool breeds, the Stavropol, Manych Merino, Soviet Merino and Grozny, by 0.8-2.4 microns, and increase the bright wool yield by 1.0-3.6pc.

“It has also allowed us to approach the optimum ratio of bright wool yield and liveweight of the animal. Such parameters, in our view, benefit the Merino sheep breed.”

In the past 20 years, mutton production had become increasingly important.

“Mutton production has been growing in the world, and in Russia, by 20-35pc respectively, and the price has increased by 30-50pc in the past three years,” Dr Selionova said.

“In connection with increasing sheepmeat productivity in 2014, together with Stavropol State Agarian University, Institute of Gene Biology of the Russian Academy of Sciences, a new scientific direction has been started with genetic research into meat productivity on five of southern Russia’s most widespread breeds, the Stavropol, Manych, Soviet, Dzhalginsky Merino and North Caucasian meat wool breed.

“We have also been conducting research on estimating the quality of muscle tissue of young stock within crossbreeding.

“It has been established that regardless of the breed, the increase in the energy density of the diet increases the number of muscle fibres per 1 millimetre squared, reducing their diameter and amount of connective tissue, which together determines a high scoring of meat marbling and meat quality respectively.”

Dr Selionova said she looked forward to discussing more of the research undertaken by the Russian institute, when she spoke at the Global Merino Unity Conference, on Tuesday, September 6.

“This is my first time in Adelaide, and I would encourage everyone with an interest in the Merino sheep breed to attend,” she said.

Standard registrations for the World Merino Insight close on August 15. To register: Visit www.worldmerinoinsight.com.au or contact Emma at 08 8125 2200 or email [email protected]