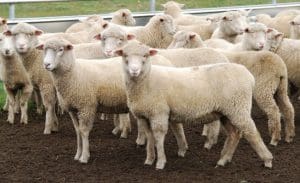 About 10,000 lambs and some sheep were due to be shipped from Tasmania this week, but have been delayed at least until next week due to rough weather in Bass Strait, with swells of 8-10 metres forecast last night.

Slaughter sheep and lambs have to be shipped from Tasmania on a Monday, Tuesday or Wednesday to make that week’s abattoir schedules.

Prices for quality trade lambs lifted by as much as $22 in some saleyard centres as processors attempted to replace the delayed Tasmanian supplies.

After Tuesday’s saleyards sales, the National Livestock Reporting Service reported the Eastern States Daily Indicators for trade and heavy lambs as recording the biggest gains. The ESDIs for lambs are: restocker 584c/kg, down 7 cents; Merinos 592c/kg, no change; light 582c/kg, up 3c; trade 628c/kg, up 8c; heavy 645c/kg, up 11c. The national trade lamb indicator closed on Tuesday at 629c/kg and the heavy indice is on 646c/kg.

New season lambs are starting to trickle into some New South Wales, South Australia and Western Australian markets, although most drafts are light and trade weights.

In Victoria, the NLRS said there were some upward adjustments to light and trade weight lamb over-the-hook indicators this week, while heavier categories remained steady. Mutton indicators eased across all categories, with medium weights averaging 350c/kg cwt.

The NLRS said lamb quality was good, with plenty of heavy and extra heavy lambs offered. There was a limited supply of trade weights in good condition, but good numbers of store and light processing lambs. All the usual buyers operated in a dearer market.

Sheep quality was mixed. Fewer heavy sheep were penned. Merinos with longer wool were dearer and plainer crossbred ewes were firm. Medium weights sold from $74-$129. Heavy Merinos made to $160. Most sold from 380-440c/kg cwt on average.

It was a mixed quality offering of sheep, with all weights and grades represented. Heavy Merino ewes sold firm, but crossbred ewes were back $10, with the tops selling to $151. Hoggets were up to $10 dearer, selling to $162.

The NLRS said there was a good supply of well-finished heavy weight lambs and a few secondary quality lots. The market recovered some of the previous market’s losses, while the improved quality also contributed. Market trends for good quality trade and heavy weight lambs were slightly dearer. The secondary quality lambs sold to the trade were harder to sell, with restricted competition. The quality of the sheep was very mixed, with the market trend firm to cheaper.

The NLRS said the sale highlight was the first few pens of new season young lambs. Quality was mixed, with the better quality medium and heavy trade weight lambs receiving the best support from buyers.

The pick of the slaughter lambs were dearer, while prices for plainer types and light weight lambs fluctuated to average below the previous sale held a fortnight ago. Quality and numbers were an issue on some of the easier results, with a lot of smaller pen lots in the yarding as the last of the old season lambs are cleared out.

About 180 new season young lambs were yarded and these sold at buoyant price rates, based on conservative values of $9-$10 for skins. Local agents said they expect new season lambs to start trickling into the market, although volume numbers are not expected for another month or so. A feature line of 104 new season lambs estimated at around 22kg sold for $164 at an estimated cost of around 700c/kg cwt.

The best of the old season lambs sold from $154-$185, averaging over 600c/kg, with the top pens commanding up to 680c/kg. Domestic lambs generally sold from $124-$144. The lead pen of new season young lambs were estimated at 25kg carcase weight and sold for $175. There was only a very limited and patchy selection of Merinos and small crossbred lambs, making accurate price quotes difficult.

Sheep sold at cheaper rates, but in line with more recent market trends. A small pen of heavy crossbred ewes sold for $115 and the better covered Merino ewes sold from $86-$105.

The NLRS said lamb quality remained mixed, reflecting the season, although there were some very good pens of neat trade lambs off grain. Competition for the main lines of trade weight lambs was exceptionally strong, amid reports the wet weather had disrupted the movement of lambs to mainland abattoirs from Tasmania. One of the major domestic orders was particularly strong and underpinned the dearer rates on the better quality fat score 3 and 4 trade lambs.

Prices for slaughter lambs over 20kg cwt were $5-$20 dearer. Plain and light weight lambs under 16kg sold at similar rates. The market reached a top of $210 for a pen of heavy export lambs estimated at around 33kg cwt. The limited selection of heavy lambs over 30kg was dearer, averaging an estimated 605c/kg.

The sale highlight was bidding for trade lambs, with domestic buyers paying to $190 for lambs destined for a local kill. The main drafts of lambs in the 22-24kg range averaged $173 at an estimated 700c/kg cwt. Once off the real pick of the supermarket style lambs, most sales ranged from $128-$160 at an estimated range of 650-680c/kg. Fewer Merino lambs were offered and quality was plainer. Prices fluctuated depending on quality, with the best light trade types making more than 600c/kg. However, most of the small and light types trended under this at similar rates to last week.

The sheep were mostly mixed pens of crossbred and Merino ewes. The market trended cheaper, although the best Merino sheep still made over 400c/kg in places. Extra heavy Merino ewes in a good skin sold to $132 and heavy crossbreds made $106-$126. Averages of 350-400c/kg cwt covered most mutton sales.

The NLRS said lamb quality was average, with most of the regular buyers attending in cold and wet conditions.

At the South Australian Livestock Exchange at Dublin on Tuesday, the agents yarded 3295 lambs, 5738 fewer than last week, and 602 sheep, 2097 less.

The NLRS said the mixed quality yarding of crossbred and Merino lambs sold to the usual trade and processor buyers in near Antarctic conditions. Demand was strong throughout and supermarket buyers competed strongly with wholesalers to secure the limited numbers of trade weight lambs available. Feeder buyers were occasional bidders on crossbreds and restockers bought light weight Merinos at easing rates.

The NLRS said fewer trade and processor buyers attended and not all were active on the very mixed quality penning. A number of lamb pens had seed issues, affecting prices in the overall softer market.

The NLRS said quality eased with supply, but some good lambs and ewes were offered. Small numbers of new season lambs were available, but were mainly small light weight drafts. Most buyers attended, but one major processor was absent due to seasonal maintenance.

Prices held their recent levels across most categories. Light store lambs sold to restockers for $40-$60. Better framed and conditioned drafts suited to air freight processors and feeders made $65-$97, to be firm to slightly easier. Trade lamb prices were marginally higher at $87-$119, to be firm to $4 dearer overall. Prime trade weight drafts averaged around 504c/kg, with plainer and Merino drafts making around 485c/kg on average. Heavy lambs sold to $133, with a number of pens exceeding 25kg cwt.

At then northern Tasmanian saleyards at Powranna and Killafaddy on Tuesday, the agents yarded 850 lambs, 155 fewer than last week, and 600 sheep, 150 more.

The NLRS said the sales were held in driving rain. Recent rain has seen most of the state being wetter than for many years and is definitely affecting supply to local and interstate destinations. Recent rough weather has held up much of the interstate shipping and in turn has meant that some regular Victorian buyers were not active.