AUSTRALIA’S state jurisdictions should get electronic ear tags into their sheep and goats as quickly as possible while sorting out business rules and infrastructure for a national EID system, according to retiring saleyard industry leader Stuart McLean OAM.

Mr McLean last week retired as president of the Australian Livestock Saleyards Association after eight years in the chair and 25 years on its executive committee.

Mr McLean was honoured with a life membership of ALSA and honoured for his contribution to the broader red meat sector for many years in a variety of roles.

These included as chair (current) of the Victoria Sheep and Goat Identification Advisory Committee, industry working groups and national committees. He is also currently the chair of the National Horse Traceability Working Group.

Mr McLean was vice-president of ALSA’s predecessor, the Livestock Saleyards Association of Victoria, under president Gerald Shanley, when the body gave qualified support for a mandatory electronic sheep identification system provided it received government financial support. At that time, Mr McLean was already on the VSGAIC and played a key role in supporting the Victorian Farmers Federation’s position and in gaining State Government investment in the state’s mandatory sheep EID system, the first in Australia. Mr McLean was also a member and president of the Municipal Saleyards Association of Victoria, and involved in the introduction of electronic tagging of cattle in Victoria before this.

“I’ve been around when we’ve introduced quite a lot of reform as much as it is than anything else in the biosecurity space and traceability of animals.”

Mr McLean also played a key role in ALSA’s growth from Victoria to include South Australian and New South Wales members, in establishing animal welfare standards in saleyards and in proving the concept of electronic National Vendors Declarations, later handed over to Meat & Livestock Australia to progress.

“My focus has always been on ensuring that the members had a voice through the association and we were able to advocate on their behalf whether it was to governments, departments or funding bodies….for the betterment of the industry.”

Australian Federal Government and state governments have given in-principle support for a national sheep and goat EID system, but Mr McLean believed the process had “quite a way to go.”

“I think it is heading in the right direction.

“My view of it would be that the smartest thing that these other states could do would be to get some (electronic) tags into some lambs very quickly – next year at the latest, starting in 2023,” he said.

“That will give them at least a base to move from, but I’m really from a broader industry and biosecurity perspective across Australia, it’s a great outcome that they are going to head down this direction.

“I’m hoping that they do not procrastinate for two or three years thinking about how they should do it,” Mr McLean said.

“My view would be that there is a really good model working already (in Victoria), have a look at it, see if they can adapt that model to their own states and then link it all together as it rolls out in the various states.

“I reckon it’s going in the right and I’m hoping it will be all up and running within the next two years.”

On the position of some bodies that national EID system business rules and infrastructure compatability between states needed to be finalised before tags go in ears, Mr McLean said there is plenty of reports and evidence on how than can be achieved.

“My view would be that they should be going hand-in-hand and you can begin the process of getting tags in ears and also looking at the infrastructure.

“I think the biggest issue they are going to have is actually getting the stuff together … like the panel readers and the tags,” he said.

“They ought to put an implementation plan together very quickly and make it happen,” Mr McLean said.

“For my point of view it should be as simple as pushing some buttons and making it happen rather than going round in circles and looking for other alternatives that may or may not be there.”

He also indicated the industry should be not be distracted or delayed by consideration of other tag technology before implementing a national system compatible with the proven technology used in the Victorian sheep and national cattle EID system. 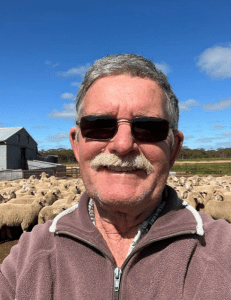 The new ALSA chair Gerald Leach commended Mr McLean for his long-time contribution to ALSA and the broader rural and regional sector.

“Stuart led the saleyard sector at a time when it needed to stand up to vested interests opposed to the progressive approach to industry reform taken by ALSA, particularly in the case of the introduction of mandatory RFID for sheep,” Mr Leach said.

“His leadership was critical and Stuart saw the need for mandatory RFID as being essential for saleyards to continue to be able to operate effectively from a traceability perspective, but also was a leader in getting the State Government to understand that they needed to support the saleyard sector financially in getting the equipment that was needed to do that.

“He was a key figure in bringing all of the parties together.”

The ALSA conference was titled Saleyards After Covid and covered a number of topics including consideration of a range of potential digital opportunities for the sector, a stock standstill exercise and updates covering the processing sector and red meat prices.