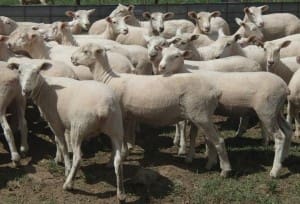 Light and medium trade lambs made from 463-625c/kg in NSW on Monday, but didn’t venture over 600c/kg in Victoria, New South Wales and SA on Tuesday, ranging mostly from 450-580c/kg.

The National Livestock Reporting Service quoted only the eastern States Daily Indicator for restocker lambs as improving after Tuesday’s saleyard sales, with all other indicators lower.

The ESDI and national mutton indicators both finished down slightly on 310c/kg.

In Tasmania, OTH rates for lambs were firm to dearer, while mutton rates dropped. The WA OTH rates were not available when this report was published.

The NLRS said there was a good selection of heavy weight lambs and a fair selection of trade weights. Dorper lambs were also well-supplied. All the usual buyers operated.

Most weights and grades were represented in the mixed yarding of sheep. Merino ewes finished firm and crossbreds were dearer. The 2 score ewes sold from $38-$76. The better 3 and 4 score crossbreds made $68-$105 and Merinos sold up to $116. Merino wethers sold to $112.

The NLRS said the quality of the lambs was fairly mixed, with trade weight and heavy weights well-represented. There were fewer good quality young lambs suitable for restockers. The usual buyers attended.

Heavy well-finished sheep were well-supplied and were mostly crossbred ewes. There was a small number of heavy Merino wethers. Market trends were firm to a shade dearer.

The NLRS said lamb quality was similar to previous sales, with good numbers of well-finished lambs offered along with the plainer types. Heavy and extra heavyweight lambs were again well-supplied. The usual buyers competed in a slightly cheaper market.

The NLRS said lamb numbers lifted after strong sales last week and the return of hot weather. Quality remained very mixed, with only supplementary-fed lambs now showing decent carcase finish. The usual field of buyers attended, but not all made purchases. Bidding fluctuated and the market lost momentum later in the auction.

Processor demand for light lambs was keen, with the best lines selling from $85-$100. A feedlot order paid to $108 for bigger framed store lambs, while the general run of small lambs made $70-$90 with restockers.

The sheep yarding was very mixed and comprised mostly smaller lots, with only limited lines of Merinos. Prices varied, with the heaviest ewes trending cheaper, but the better quality trade weight sheep mostly dearer. Prices reached $100 for heavy Merino ewes nearing full wool and the heaviest crossbreds made from $80-$95. Most trade weight ewes sold from $55-$78. Light mutton made from $37-$50. The best trade weight mutton trended over 300c/kg cwt.

The NLRS said lamb quality was again good, with fair numbers of extra heavy and heavy lambs. Trade weight and light lambs were also well-supplied, with the heavy lambs reaching $175. A few lots were passed in. The usual buyers operated in a cheaper market.

Heavy and extra heavy lambs generally sold $2-$8 easier. The best domestic lambs sold close to unchanged, with the better covered lambs well-sought after. The best unshorn lambs made to $129.

Restockers and feeders were again very active and paid from $92-$128 and from $49-$80 for lighter lots, with most processor and restocker lambs a few dollars dearer. Light weight 2 score lambs sold from $69-$92.

The NLRS said a very mixed quality yarding of crossbred and Merino lambs sold to fluctuating competition. The usual trade and processor buyers attended, but feeders and restockers were more prominent.

The NLRS said the usual trade and processor buyers were joined by a major domestic buyer who wasn’t active. Quality was mixed and a large number of light weight Merino types was offered. Restockers were active and prices improved.

The NLRS said the very mixed lamb yarding contained only a few pens of prime trade and heavy lambs. Quality across the yarding was mostly plain, with many tail drafts. All the usual buyers attended, with reasonable competition for the better drafts of lambs.

Prime lamb prices lifted slightly. All other segments of the market remained close to firm. Light store lambs sold from $10-$66. Light weight Merinos made $10-$47 and crossbreds sold $6 dearer. Light lambs suitable for air freight processors and feeders were close to firm at $50-$93. Trade lambs made $90-$117, with the prime portion up to $5 dearer and close to 500c/kg cwt. Heavy lambs sold from $118-$125 to be up to $5 dearer.

There was reasonable competition for the better drafts of light weight ewes. Live export orders were limited to finished wethers and rams. Overall sheep prices remained firm, with rates erratic at times due to quality.

Ewe mutton sales were stronger for light weight drafts with increased processor competition and restocker demand. Light weight ewes sold from $25-$58, up to $8 dearer. Medium weight processor drafts made $47-$68.50 to be marginally easier. The better conditioned and heavy mutton was marginally dearer at $50-$86. Dearer ewes had wool values of more than $18. Restockers purchased limited numbers of lighter conditioned ewes for $46-$57 and better ewes for $57-$72.

Wether sales were selective, with the finished heavy wethers for live export making $80-$104 and lighter drafts $65-$88. Store wethers sold to feeders and restockers made $50-$85. Bare shorn, very small and plain drafts made from $37. Ram prices were mixed. Better ram lambs sold to $97 and most live export drafts made $55 and $70. Old rams sold to processors for $10-$35.