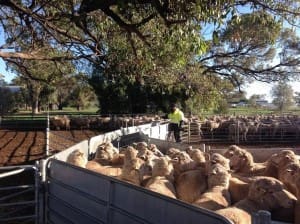 SO you think you are a rational human being who makes good, objective decisions?

Well unfortunately, this is not always true and a large proportion of society – from sharebrokers to corporate boardrooms to agribusiness managers – are making unwise decisions far too commonly.

Why didn’t the boards of Enron, OneTel, Timbercorp and Great Southern see the end coming? Or did they, and fudged until there was no more room to move?

Why do so many large infrastructure projects (such as tunnels, rail, new agriculture) overestimate the revenues when similar projects have failed before them?

Are these failures confined to the large corporations or do we see family-scale businesses making similarly unwise decisions?

The facts are straightforward: if left unchecked, our subconscious biases will undermine strategic decision-making.

As a starting point, it’s worth pointing out some of most common drivers of our distortions and what checks and balances we might put in place to reduce the risk of these biases generating decisions that we may regret.

The reason is known as the ‘halo effect’, which is our cognitive bias. This is where our overall impressions of a person, a company, a brand, or a product influence our feelings and thoughts about that person, company etc. Reason and rationality becomes a poor second in our evaluation processes.

In other words, when an employee excels in some areas, a laid-back manager might perceive him or her to be proficient in all areas and appraise highly as a result. In the area of recruitment, the ‘halo effect’ can be extremely powerful.

Physically attractive or well-dressed candidates, for instance, may consistently be rated by interviewers as being brighter, smarter and better equipped than their less attractive peers.

The ‘halo effect’ not only influences decisions within the business but outside of it as well, which in turn can affect organisational performance.

Researchers Mckinsey and Co reviewed 1048 major business decisions, and found that process mattered more than analysis, by a factor of six. 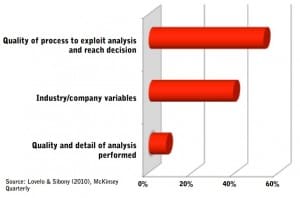 Good analysis is important, however far too often this is overridden by poor processes to arrive at the decision.

These findings do not mean that analysis is unimportant, as a closer look at the data demonstrated. Almost no decisions that made it through a very strong process were backed by very poor analysis.

Why? Because one of the things an unbiased decision-making process will do is ferret-out poor analysis. The reverse is not true; superb analysis is useless unless the decision process gives it a fair hearing.

Confirmation bias: We look for information, and better remember information, that confirms our beliefs rather than evidence that contradicts them. It is why the double-blind experiment was introduced in science.

Self-serving bias: This is our tendency to attribute positive events to our own skills and behaviours, but attribute negative events to external factors. Research has shown that narcissists and others with borderline personality disorders such as psychopaths are more likely to display the traits of this bias.

Optimism bias: Neuroscientist Tali Sharot suggests we are biased into thinking a bad outcome is less likely to happen to us than others. The science of optimism shows that our brains aren’t just conditioned by the past. They are constantly being shaped by the future.

Group-think bias: Grown-up lingo for peer pressure, group-think occurs when you feel pressured to adhere to opinions held by a larger group. One well-known example of Groupthink in action was the Challenger Space Shuttle disaster. Engineers of the space shuttle knew about some faulty parts months before takeoff, but they did not want negative press so they pushed ahead with the launch anyway. Groupthink is more likely when there is:

When we are faced with critical decisions, the following processes will help minimise the negative impact of bias on the outcome:

A very good article, “Why Good Leaders Make Bad Decisions”, identified a number of factors that most commonly impact on us all. They called these the ‘red flag’ conditions. They are:

McKinsey and Co, in the chart at the beginning of this article, clearly demonstrate the value of good processes to achieve greater success. They suggest four steps in this process:

Decide which decisions warrant the effort: they suggest major mergers and acquisitions, “bet the company” investments, and crucial technological choices fall in this category.

Identify the biases most likely to affect critical decisions: by raising the potential biases, there is a greater chance to overcome them. Chances are one of the Big Five identified earlier are present in one or more of your management team.

Select practices and tools to counter the most relevant biases: these should be appropriate to the type of decision at hand, to the particular culture of your organisation, and to the decision-making styles of your key people. 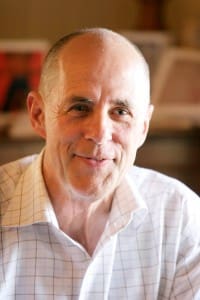 * Author David Hanlon’s personal development training company, The Right Mind, will hold one of its popular Rural Leaders Bootcamp programs in Brisbane from 2-4 September. This is a rigorous and challenging program that will help participants to focus on what it takes to become highly effective leaders and to re-invigorate their commitment to leadership.

The program has established credibility and demand from a wide range of occupations. It attracts people who want to be challenged and provides a broad range of excellent tools to assist participants to enhance and nurture their leadership skills.