EMPLOYMENT opportunities in agriculture are largely being driven by the replacement of older, retiring workers, moreso than the creation of new jobs, according to a recent report from the National Centre for Vocational Education Research.

It found that in some occupations, such as agriculture, a high proportion of the job openings is due to replacement demand rather than employment growth.

“Replacement demand is high for occupations with relatively older workforces, a consequence of workers’ proximity to retirement. An example of high retirement-replacement demand includes farmers and farm managers, with 63.3 per cent of the 80,900 job openings (10,100 per year),” the report said.

The report found that across all employment sectors, the second highest number of job openings, 71,300 per year on average (570,600 in total), was for managers.

However, the report conceded that the suggested replacement rate for farm operators of 3.4pc compared to the national average of 2.2pc might be slightly overestimated, as many farmers continued working past the age of 70 years, the cut-off age in the study’s modelling for compulsory retirement.

“The age profile of farmers and farm managers is on average much older than the rest of the workforce. In 2016, about half of them were 55 years or older, with a significant proportion over 70 years.

“The model for replacement demand assumes all people retire at age 70 years. As a result, the replacement rate for farmers and farm managers, at 3.4pc, is much higher than the 2.2pc average across all occupations.

“As many farmers tend to continue working past the age of 70 years, this means that in this case our model will over-estimate the actual replacement rate for this occupation. Consequently, our forecasts of job openings for farmers and farm managers may, to a certain extent, be over-optimistic.”

The report showed employment continuing to shift towards higher-skill jobs in the Australian labour market, with a slight acceleration in this trend with higher productivity growth.

In most occupations, replacement demand contributes more to job openings than does expansion demand.

It suggested employment in industries such as agriculture would benefit from the lower value of the Australian dollar relative to the currencies of Australia’s major trading partners and expanding export opportunities through free trade agreements (FTA) with countries in East Asia. 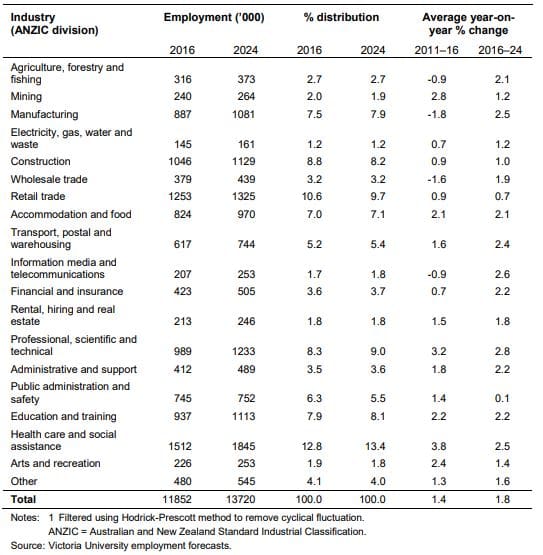 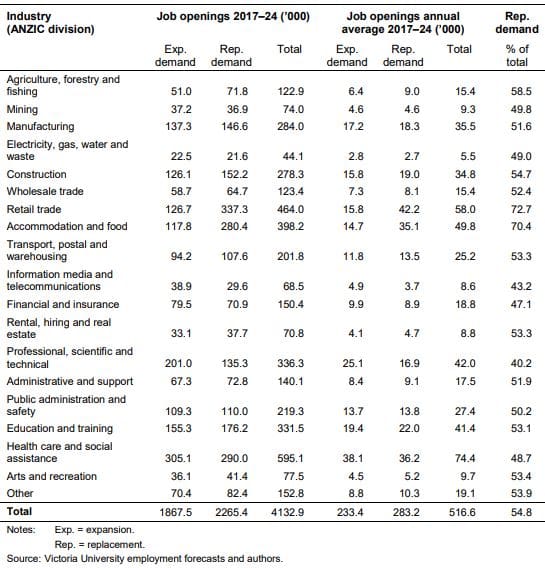 The research report from the National Centre for Vocational Education Research, ‘Future job openings for new entrants by industry and occupation’, was authored by: