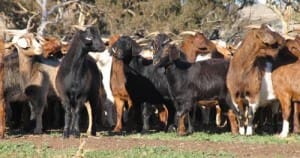 Most states registered a large reduction in goat kills for the first two weeks of the month.

This has assisted prices staying at record highs, with the November average over-the-hook indicator for 12-16kg cwt goats up 123 cents year-on-year to 481c/kg.

According to Department of Agriculture figures, Australian goat meat exports in November eased 30pc on the previous year to 2726 tonnes, underpinned by lower slaughter.

Shipments to Korea doubled to 40 tonnes, but remained relatively similar year-on-year to Taiwan at 403 tonnes.