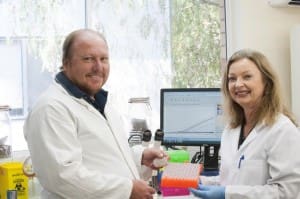 A FOOTROT test that can quickly differentiate between virulent and benign forms of the debilitating sheep disease is expected to be ready for use nationally next year.

Western Australian and Victorian scientists are collaborating in testing the effectiveness of a new DNA-based test developed by Swiss scientists to detect virulent footrot in sheep and goats.

The new test is expected to cut result turnaround times from three weeks to 2-3 days and be about 35 percent cheaper in Western Australia. No costs estimates for other states are available.

The Department of Agriculture and Food (DAFWA) Validation of the new test is being funded through the Sheep and Goat Industry Funding Scheme (IFS), which also funds the WA Footrot Control Program.

IFS Management Committee chair Jeff Murray said the cheaper and faster test is expected to be useful for defining the footrot strains in the 30 WA properties currently under movement restrictions. He also saw a biosecurity role for the test in monitoring interstate stock movements.

Vaccine plus new test to have national implications

WA has also gained approval for the trial use of a strain-specific footrot vaccine, which with the new test, raised the prospect of being able to declare the state free of the disease, Mr Murray said.

The new test and vaccine trial would have implications “right across Australia” and could help solve the age-old arguments as to whether sheep had benign or virulent footrot, he said.

“And of course the big implication for that is around the animal welfare side of it; that’s the big plus.”

Mr Murray said the new test was expected to be available in time for next year’s footrot season.

“The new test has passed the first validation hurdle with flying colours – when applied to bacterial cultures it is able to detect and differentiate between benign and virulent footrot equally as well as the current gelatin-gel test.

“Now DAFWA is trialling the new test directly on swabbed material from the affected feet to establish its effectiveness,” he said.

“Final validation of the new test is expected to be completed by March 2016, with the new test available for use for the following footrot season.”

“Because the new test does not require bacteria to be cultured, results can be obtained in 2-3 days compared with up to three weeks using the current culture and gelatin-gel test,” he said.

“The cost will also be substantially less because the new test will not require culture of the bacteria.”

DAFWA’s Dr Nicky Buller said WA and Victorian scientists were comparing results on testing of the new DNA test against the current culture and gelatin-gel test.

“It is correlating with the gelatin-to-gel test that we use to determine whether an isolate is benign or virulent.”

The new DNA or polymerase chain reaction test can detect the bacterium in a foot lesion and differentiate the isolate as virulent or benign. It would help determine whether a footrot strain was virulent or benign before a vaccine was developed for use, she said. The cost is expected to be around $65 compared to about $100 for the current culture test.

For more information about the WA Footrot Control Program, go to the DAFWA website at agric.wa.gov.au and search on ‘footrot’.