Prices for best lambs and mutton lift as numbers decline 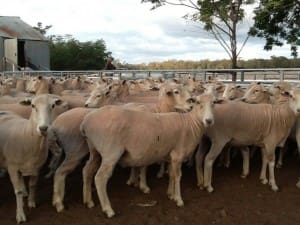 At Wagga in NSW on Thursday, heavy lambs averaged 621c/kg cwt, while the extra heavy pens averaged from 587-593c/kg, around 50-60c/kg up on levels just weeks ago.

Mutton also found new levels over the last two days for a reduced mid-week offering, despite the normal winter wind down at some works.

However, despite the high points in carcase weight rates for quality lambs and sheep, the overall quality of yardings and less interest from restockers contributed to all NLRS Eastern States Daily Indicators for lamb being quoted either remaining firm or dropping after Thursday’s sales.

The NLRS mutton indicators lifted five cents, with the ESDI closing on 361c/kg, and the national indice is on 360c/kg.

The NLRS said it was a good quality yarding, with good numbers of heavy weight and heavy trade weight lambs in all runs, along with fair numbers to suit the store buyers.

The NLRS said quality slipped from the previous sale, with greater numbers of dry longer-wool lambs lacking finish. A full field of buyers attended, along with restocker and lot feeder competition. Trade lambs were in reasonable supply, but quality was mixed, causing prices to fluctuate throughout the sale.

Light trade weight lambs were limited and, due to the lack of quality, prices eased $4 to average $121.20. Medium and heavy trade lambs were in reasonable supply, however quality was very mixed, with the supplementary shorn lambs attracting the better prices to average $137.20. Merino lambs were well supplied and well-finished pens suitable for the trade made from $102-$139. Plainer light weight lambs to the processors sold $5-$8 cheaper, making from $75-$108.

Mutton quality was mixed, with the majority of the sheep medium weights. Merino ewes suitable for the trade were well supplied and competition strengthened due to increased buying competition in this category. Trade sheep made from $73-$114 to average 398c/kg cwt. Heavy sheep were in limited numbers, selling from $111-$145.60 to average 399-414c/kg.

The NLRS said the usual buyers bid on a mixed quality yarding, with some good pens of heavy and trade weights, but more unfinished lambs were again presented. There was virtually no restocker or feeder activity.

The NLRS said lamb quality was average to good, with all the usual buyers operating on the lambs, but not all on the sheep.

Lambs generally sold to a dearer trend, with most improving $2-$5 and more in places. The best of the 24-26kg cwt lambs showed the most improvement. Restocking activity was limited to a few pens of light lambs selling to $52.

The NLRS said quality was mixed with the majority of the yarding lacking weight and condition. The usual trade and processor buyers attended, however not all were active and prices were generally firm.

The NLRS said the mixed quality yarding was dominated by store wether Merino lambs. Competition was solid from restockers and regular processors, but there was limited live export competition. Prices remained firm on last week’s market.