Premium is Australia’s point of difference, expert to tell Lambex 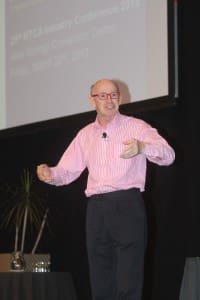 Australian livestock producers need to ‘sell their story’ to emerging markets to ensure ongoing demand for premium beef and lamb.

That’s one of the messages international food marketing expert Professor David Hughes will share with audiences when he speaks at Lambex 2014 in Adelaide on Thursday.

Mr Hughes has issued a challenge to Australian producers to respond quickly to changing world consumption – otherwise, he warned “you’ll be down the bottom of the commodity market, arm wrestling with buffalo meat from India.”

David Hughes is Emeritus Professor of Food Marketing at Imperial College London and travels the world talking to businesses, trade associations, governments and conferences on global developments in the food and drink industry.

He’s been making regular trips to Australia for more than 20 years and has been closely observing the way worldwide consumer and demographic trends impact red meat industries.

According to Mr Hughes, the best opportunities for growing demand are in the emerging markets of Asia and Africa, but industries will have to work hard to “sell” the premium message.

“Beef and lamb are premium products with a premium price tag,” he said.

“In the past five to 10 years we’ve seen consistent and increasing demand for higher value protein in emerging markets. Thank the Lord that’s been happening, because demand has been muted in the more traditional markets.

“I tell red meat audiences to celebrate the fact they’re premium, but understand it brings responsibility.

“You have to earn that premium every day. You have to work out what is your point of difference over much cheaper, alternative proteins and constantly reassert and articulate that message.”

David tells his audience to imagine they are an emerging Asian consumer who has just picked up Australian beef or lamb in a supermarket.

“Say to yourself ‘I’m willing to pay twice as much per kg for this than I’d have to do for my pork and other meat because…’ then finish the sentence,” he said.

“Maybe it’s because ‘I know it’s so tasty it makes me dribble with excitement’ or ‘the story of Australia and its safe, green and promised land is so reassuring’.

“Whatever it is, you have to finish the story.”

“These are mature markets and meat is under pressure,” he said.

“There are a range of reasons, but the main ones are the Global Financial Crisis (GFC) in Europe and North America, an ageing population in Europe and a worldwide focus on health and wellbeing.”

According to Mr Hughes, the GFC put pressure on consumers in developed countries to reduce spending on relatively expensive meat protein.

“This translated as either trading down to cheaper cuts or, for those at the margin, eating less meat,” he said.

“It was even visible in Australia’s beef exports to Japan. During the GFC there was a switch away from grain-finished and chilled, to grass-finished and frozen.”

David said the slowdown in demand for red meat during the GFC was exacerbated by another demographic trend: ageing.

“As they age, people tend to eat less and, in particular, they eat less meat,” he said.

On the positive side, while older consumers want to eat less meat, Mr Hughes says they also want to buy better quality.

“If you’re older and have money in these developed countries, you want to eat less meat, but better quality, and you’re willing to pay more.

“So that’s a good consumer trend for beef and lamb producers.”

One less positive trend is the continued perception that red meat is less healthy than white meat.

“This is a constant issue and it’s a worldwide perception,” David said.

“We’ve just had another burst of it in the UK with the release of research showing a link between major diseases and eating too much protein. It tends to be the red meats and processed meats that get the attention.”

“There’s been a lot of talk in Europe of more cooking from scratch as people try to save money,” he said.

“That suggests the trend towards convenience, ready meals is slowing, but I don’t see that at all. In fact, there’s been astonishing growth in this area in Australia over the past five years and I see that continuing.

“In UK supermarkets now you can buy stir fry kits with three interchangeable components – meat, cut vegetables and noodles. These are packaged separately but presented together – a challenge for retailers who generally put produce in the produce section and meat with meat.”

Mr Hughes also foresees niche trends such as ‘paddock to plate’ and ‘sustainably produced food’ becoming the norm in developed and emerging economies.

“Sustainability and environmental elements won’t earn you a premium, but they will give you the ticket to enter premium markets where a great taste and story provide the impetus for a price premium,” he said. “Not getting over the ‘green bar’ will see you penalised with a price discount.”