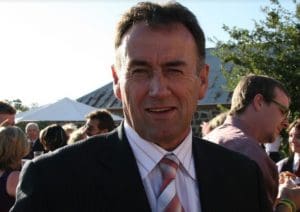 John, 60, started his government career with the Department of Crown Lands and Survey in 1979 and has worked across regional Victoria in Swan Hill, Ellinbank, and Horsham – but mainly out of offices in Hamilton and Casterton.

He said his work had provided adventures and challenges – including working with many organisations and gaining their trust to work with them to protect community assets.

“Trialling and establishing compliance for pest animal management was difficult early on, but is now widely accepted and requested by the community and environment bodies,” he said.

John’s most recent role has been as biosecurity manager for the state’s main established invasive animals; rabbits, foxes, pigs and goats. He said some of his proudest achievements were being part of the team that lead Victoria to become the first jurisdiction to fully privatise and commercialise access to 1080, and lead the development and accreditation of an established invasive animal (EIA) training program for Victoria.

His final major piece of work has been on the RHD Boost project for Victoria – a 20-year national program to biologically control rabbits. The latest results on its initial impact are due soon.

“I hope I have improved systems and processes for the management of EIA in Victoria by influencing and providing solutions to the wicked problem that is the impact of established pest animals in our state.”

As much as it’s about the work, John said he has been fortunate to work with wonderful, intelligent and supportive colleagues who have given him many years of enjoyment and friendship, as well as his achievements in the established invasive animal space.

“A lot has changed since I first began; the department was a very male dominated workforce, now it is a great mix of professional, dedicated people using science to achieve results,” he said

Agriculture Victoria director plants, chemicals and invasive, Sharyn Williams, said that throughout John’s career with the department, he has been a key contributor and driver in incorporating proven ideas from research into established pest animal management programs.

“He has been the leading advocate in show casing the results of best practice pest animal management in Victoria.

“John has been a friend to many, a mentor, and a true gentleman to work with and has guided many staff with their career development and always provided support to colleagues,” she said.

“John’s technical input, commitment to mentor and teach, and professional approach are just a few examples of the legacy he leaves in the department.”