Angie and Gary White in Finland with Mari Kaplas holding her daughter of White’s Fella.

SHEEP dog trialling will be an Olympic sport in Brisbane in if New South Wales Angie White and hundreds of supporters have their way.

On a whim, the wife of top yard/utility trialler and Kelpie breeder Gary White last week she is going to write to the Australian Olympic Committee to ask that sheep dog trialling become an Olympic event.

“If you are happy to provide a letter of support let me know,” she said in a 25 July White’s Kelpie Stud Facebook post.

“If they can have surfing and skateboarding, I reckon we could have trialling.

“Imagine representing Australia in the Olympics. How good would that be ⭐, she asked.

“Maybe all our overseas friends in USA, Germany, France, UK and Finland could jump on board also.”

Countries hosting Olympic games get to nominate new sports for their in-country events for consideration by the International Olympic Committee. Japan’s additional sports for the Tokyo Olympics were surfing, sport climbing, skateboarding, baseball and karate.

Angie also asked Australia’s dog triallers to flood an ABC Adelaide page that asked the question:  ‘What sport would you like included in the (2032) Brisbane Olympics.’

Up to today, her Facebook page suggestion has received 200 thumbs ups and hearts, 58 supporting comments and 11 shares.

“I think it would be a great idea,” she said.

“I’m hoping to do that at Brisbane, but it would be good to have it at every Olympics,” Angie said.

“Definitely Brisbane should have a trial.”

Angie has already started lobbying state and federal members of parliament, who have provided details on who to write to.

She said her initiative was a knee-jerk reaction to seeing skateboarding and surfing competitors in the Tokyo Olympics coverage. On whether an Olympic sheep dog trial should be run on a yard, three-sheep, or utility course, Angie said she favoured a utility trial – combining field and yard work – but believed it would probably have to be run on an International Sheep Dog Society (ISDS) format to get worldwide support.

Angie said many of the people who had made supporting comments on Facebook were from overseas countries like the United Kingdom, United States, Finland, Germany and France, where husband Gary had conducted working dog training clinics. He has also judged the national Kelpie trial in America and

“The Americans, they would love it,” she said.

“It would be pretty good and it would probably get across the line.

“It is a fairly widely recognised sport.”

Although the National Kelpie Field Trial Championship was the only event the WKC was directly involved in, WKC registrar Mrs Barbara Cooper said the body supported other trials and she believed the WKC board would support the proposal.

“Good luck to them.”

Olympic idea has the support of the triallers

“There is no reason why they couldn’t have three different trials anyway, just have different venues for each one.

“It would be a great honour to compete and unbelievable to win it,” he said.

With his tongue in his cheek, Kevin, 79, had his doubts whether he would still be able to compete in Brisbane in 2032 when he would be 91 years young.

“I think my numbers after my date of birth might affect me – I’m 80 in October this year. 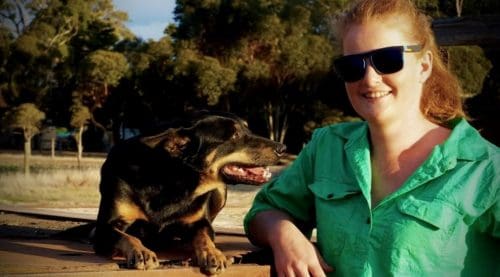 Winner of the 2021 NKFT Bree Cudmore said everyone in the working dog field would love to see trialling as a sport.

She said it would be “awesome” to represent Australia in sheep dog trialling, but she wondered how the event could be made fair for all countries with their different trial types, unless there were separate yard, three-sheep and utility events.

“I would love to see what they come up with it.

“I would love to see it happen.”