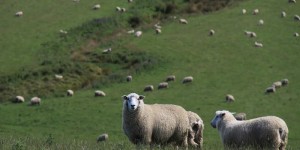 New Zealand sheep producers are expected to know the result of a nationwide vote on a new wool levy by Wednesday this week.

When voting closed last Friday, about 46 percent of eligible farmers had voted.

Federated Farmers Meat and Fibre chair Rick Powdrell said for the vote to be successful it required a ‘yes’ majority of those who vote, on a one farm one vote count and a stock weighted count basis.

Even the sheep get a vote in NZ

For the referendum to be declared in favour of collecting a levy on wool under the Commodities Levies Act more than 50 percent of the potential levy payers who vote must support the proposed levy and the supporters of the proposed wool levy must together own more than 50pc of the production units owned by all potential levy payers that return a ballot paper. The weighted vote is one vote per every 250 sheep owned by the eligible voter, so a producer with 251-500 sheep gets two votes.

In the ballot, NZ sheep farmers were asked to fund a new industry body by approving a levy of between two and five cents for each kilogram of greasy or slipe wool at the first point of sale. This equated to $4.6 million based on a three cent per kilogram levy for the 154,000 tonne of wool produced in New Zealand each year. About 17,000 sheep farmers were eligible to vote.

A positive grower vote, both by number and weighted sheep numbers, is required for the wool levy referendum to be presented to the Ministry for Primary Industries before the Minister can enact the necessary regulations under the Commodities Levies Act 1990.

NZ farmers voted ‘no’ to a levy in 2009 and the latest levy proposal has been opposed by the Primary Wool Co-operative, Romney New Zealand and the Wairarapa Romney Improvement Group, claiming it would tax farms to fund failed wool marketing strategies.

Mr Powdrell said the country’s younger farmers were more supportive of the levy than some of the older farmers, “who have hang ups with past bodies and who struggle to see the significant differences with the proposed new structure”.

He said the levy would give the industry a united voice and the opportunity to have an internationally recognised, non-commercial voice to represent wool growers effectively and in a way that ultimately made a difference.

“New Zealand hasn’t been able to fulfil its share of international wool efforts, particularly around opportunities through the Campaign for Wool, due to the lack of a levy.”