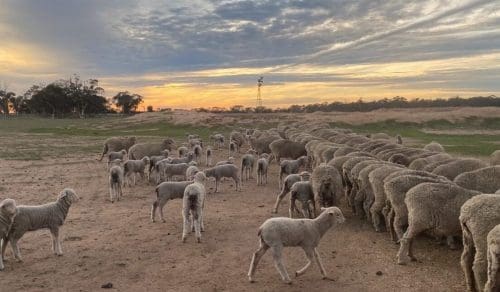 Mulesed Merino lambs with their mothers, Image – The Livestock Collective.

NEW South Wales producers mulesing sheep without pain relief could face the harshest cruelty penalties in Australia next year with the introduction of mooted fine increases.

Minister for Agriculture Adam Marshall has forecast the introduction next year of cruelty fine increases from the current $5500 to $44,000 and/or 12 months’ imprisonment for individuals and up to $220,000 for corporations for each individual act of cruelty.

The forecast fine increases follow Animal Justice Party member and NSW MLC Mark Pearson warning the failure of a recent Prevention of Cruelty to Animals Act amendments to make pain relief mandatory when mulesing did not protect NSW producers or contractors who might be deemed under the POCTA Act to cause “unnecessary pain” if they did not administer pain relief. This has been supported by the Animal Defenders’ Office.

Section 24(1)(a) of the POCTA Act 1979 states that no offence is committed in mulesing a sheep of less than 12 months of age “in a manner that inflicted no unnecessary pain upon the animal.”

Mr Pearson said the proposed penalty increases were proposed by the AJP in the NSW Legislative Council and “Adam Marshall has agreed to support it downstairs” in the parliament’s Legislative Assembly.

Mr Marshall told Sheep Central that he would not ban mulesing, which he considered was “a genuine animal welfare strategy designed to protect sheep from horrid flystrike”.

“The proposed changes to animal cruelty laws will not impact on a farmer’s ability to manage the welfare of their livestock.”

However, Mr Pearson said the $220,000 fine might apply to a company in charge of sheep who doesn’t provide pain relief for mulesing, but a contractor employed to mules sheep and who doesn’t use pain relief, or who is directed not to use pain relief, might be liable for the lesser fine of to $44,000 and/or 12 months’ imprisonment for individuals if deemed to have caused ‘unnecessary pain’. He believed these would be applied on a per animal basis.

Mr Pearson has previously told Sheep Central that NSW sheep producers who mules sheep without pain relief were being sought for potential prosecution under the POCTA Act, although he believed the opportunity for a test case this year has “fallen away.” But the likelihood of a test case to court was a matter of ‘when’ rather ‘if’, he said.

“The government is not really helping the wool grower at all.

“They are supporting the increase in penalties, but when the test case comes, of mulesing or doing other procedures without pain relief, by not telling farmers that they really need to be providing pain relief because they might be captured by animal cruelty legislation — by not sending that message — they are actually putting the wool growers in a more vulnerable situation.”

He believed the minister should be telling wool growers that if they do not use pain relief  it is likely they would not be protected by the ‘unnecessary pain’ provision in the POCTA legislation.

In a recent media release, Mr Marshall said the proposed set of penalties for acts of animal cruelty will be the toughest in Australia and have received widespread support.

“Legislation is expected to be introduced to parliament early next year.”

The proposed increases would introduce the following penalties:

Fail to provide food and shelter – Increased from $5,500 fine (current) to $16,500 and/or six months’ imprisonment for individuals and $82,500 for corporations for each individual act.

Mr Marshall said the increases were the next step on his crusade against those who neglect, harm or interfere with animals, especially illegal puppy factory operators.

“Cruelty towards animals is one of the lowest acts and for too long our penalties here in NSW have lagged behind where they need to be.

“The new set of measures I’m taking to Parliament dramatically increase both financial penalties and gaol time and introduce new offences to stop people ever being allowed to own, care or breed animals in NSW,” he said.

“These changes would enable our enforcement agencies to throw the book at those caught perpetrating cruelty offences.

“Courts will have more power to compel people to care for, or surrender their animals, as well as prevent them acquiring more animals while they face charges,” Mr Marshall said.

“Everyone – from those neglecting their pet in the backyard to covert puppy factory grubs – should be on notice from today; do the right thing or face the consequences.”

Mr Marshall said the NSW Government would work with its enforcement agencies, the NSW Police, RSPCA and Animal Welfare League, to ensure the new penalties are applied.

President of the Veterinary Institute for Animal Ethics, or Sentient, Dr Rosemary Elliott, said the implications of this ‘unnecessary pain’ legal scenario are quite clear and the organisation agreed with the contentions of the ADO and Mr Pearson.

“The message to NSW sheep producers should be that with access to pain relief for surgical husbandry procedures, particularly mulesing, there is no justification to perform these procedures without pain relief and to do so would undoubtedly cause unnecessary harm.

“It would appear that farmers who mules without pain relief are at risk of breaching the NSW POCTA legislation and of whatever penalties are imposed.”