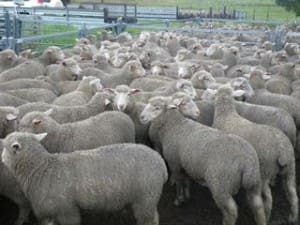 Meat and Livestock Australia’s National Livestock Reporting Service quoted the Easter States Trade Lamb Indicator as down three cents to 455c/kg cwt after Friday’s sales, with the heavy lamb indicator down two cents to 452c/kg and the mutton indicator at 275c/kg cwt, down five cents.

The national lamb and mutton indicators were also all down.

On AuctionsPlus, sheep and lamb numbers dropped by 9000 to 48,527 head, with catalogues dominated by new season lambs and Merino ewes.

The numbers of new season Merino lambs increased again on AuctionsPlus, with prices last week steady at $45-$77, averaging $60. The top-priced lambs were Pooginook blood four to five month olds out of Cootamundra.

Demand for unjoined Merino ewe hoggets remained solid, lines selling from $81 to a top of $140 for Keri Keri blood ewes at Wellington. Lines of 2-4 year-old unjoined ewes sold from $74-$90. Aged ewe prices varied from $38-$111, with the top price being for 5-6 year-old Willandra blood ewes.

The NLRS said quality was very good, however the lambs’ skins were showing signs of dryness. The yarding was mostly trade and heavy weight new season lambs, with fewer old lambs. Store lambs increased slightly in number and all the buyers were operating. Competition was good for the trade and heavy lambs and a little softer for the extra heavy weights.

The NLRS said 5200 new season lambs were penned and quality was very mixed. Many lambs showed signs of dryness and seed contamination. Most of the usual buyers competed in the cheaper market.

Lamb quality a factor at Shepparton

The NLRS said there was a noticeable decline in the presentation of young lambs this week, with most having dry skins with some seed contamination. The usual field of export and domestic lamb buyers attended, but there was less store lamb competition. The market was cheaper, with quality a factor. The better quality trade weight lambs held their prices the best to average $2-$6 cheaper than last week, while the very dry skinned lambs fell by $8-$10. Store lambs were mostly $3-$4 easier. The market reached a top of $129 for export weight young lambs, however there was only limited sales above $120.

Light weight lambs generally sold from $65-$88 to a mix of restocker and processor competition. The bulk of the young lambs which sold for slaughter were trade weights and made from $90-$112, with the best quality drafts averaging an estimated 450c/kg-455c/kg cwt. The dry skinned types were discounted down to around 420c/kg cwt. The lead pens of export weight lambs, 24-26kg, sold from $117-$129, with only about a dozen sales over $120.

The yarding of sheep was very mixed for quality and mostly comprised smaller pen lots of ewes. Prices were cheaper, with plain and lightweight ewes the most affected. Heavy crossbred ewes sold from $62-$75, while the medium grades of mutton sold from $46-$60 for an overall average of 240c/kg-250c/kg cwt across the yarding.