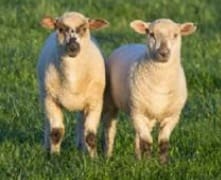 More Kiwi lambs were produced from fewer ewes in 2017.

Overall, this meant 127 lambs were born per hundred ewes compared with an average of 121 over the last 10 years. For spring 2017, a 1pc change in the New Zealand ewe lambing percentage is equivalent to 178,000 lambs.

The tonnage of lamb produced is expected to decrease slightly (-0.2pc) due to a lower average carcase weight, which offsets an increase in total number processed.

North Island lamb numbers were a major factor behind the overall lift in the New Zealand lamb crop with growth of 4.9pc (551,000 head) to 11.7 million head.

“This was a record high, and was due to good climatic conditions and ewe condition at both mating and lambing for most regions.

“However, after autumn and winter conditions were generally good, but wet, lamb growth rates were lower than normal due to a lack of sunshine, cool damp weather and more lambs,” Mr Burtt said.

“This has had a negative impact on lamb growth.

“On a positive note, there were no adverse weather events during lambing.”

In the East Coast and Taranaki-Manawatu, bearings and subsequent losses negatively impacted the lambing result.

“The most significant decrease was in Taranaki-Manawatu (-3.6pc) in response to strong mutton prices and culling of old ewes to take advantage of strong prices,” Mr Burtt said.

The decrease was influenced by Southland, where fewer ewes were mated, the lambing percentage was slightly lower than the previous year and there were fewer lambs from hoggets.

“This season’s lambing was characterised by mostly good climatic conditions, with isolated weather events causing losses in parts of the high country, and wet, stormy snaps of weather in north Marlborough and Southland.”

Lamb survival was below average in north Canterbury and Marlborough, but better than last year in Otago and Southland.

B+LNZ Economic Service’s Lamb Crop survey is drawn from its Sheep and Beef Farm Survey, which covers a statistically representative sample of over 500 commercial sheep and beef farms.