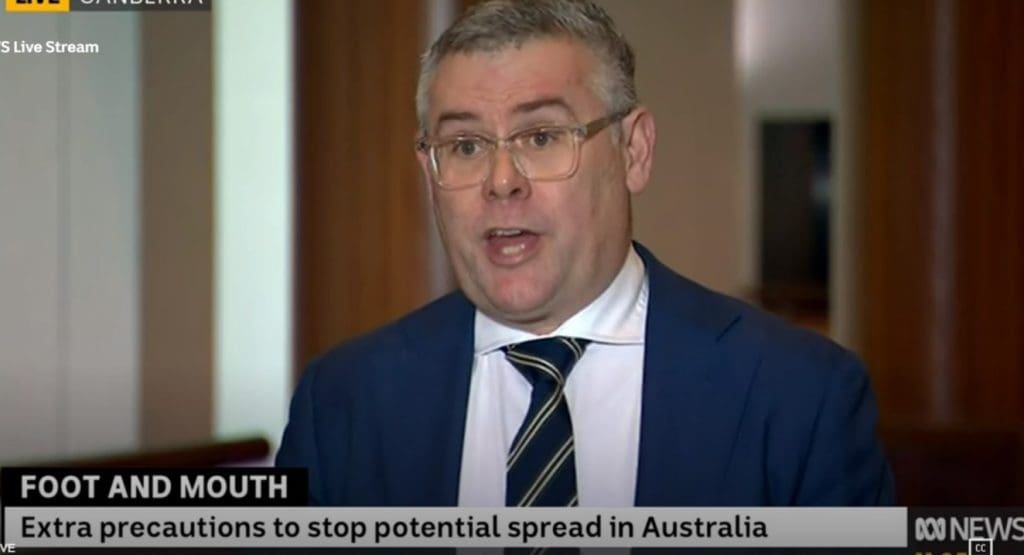 AUSTRALIA’S peak farmer body has supported a new taskforce to assess the nation’s exotic disease preparedness, while calling for long-term biosecurity funding and the screening of all inbound passengers from high-risk areas such as Indonesia.

The Exotic Animal Disease Preparedness Taskforce will be co-chaired by a senior official from the Department of Agriculture, Fisheries and Forestry and the director-general of Emergency Management Australia. It will include officials from the Australian Defence Force, Australian Border Force and Animal Health Australia.

“Industry has been planning for a Foot and Mouth Disease (FMD) incursion for decades.

“We have a world class biosecurity system, and we have detailed and effective plans in place to manage an incursion, but that doesn’t mean we should be complacent,” she said.

“The NFF continues to call for 100 percent screening of inbound passengers from high-risk areas such as Indonesia while we are in a period of increased risk.

In addition, we are seeking a long-term, sustainable funding pipeline for our world-class biosecurity systems and personnel,” Ms Simson said.

“These systems have kept Australia FMD-free for 150 years, and must be given the funding and resources they need as the threat environment grows.”

Taskforce to conduct exercises in next month

Mr Watt said the taskforce will get to work immediately, conducting a series of scenario-based exercises within the next month.

“This is the next logical step in Australia’s strongest ever biosecurity response and builds on the range of measures we have already announced to keep Australia FMD and LSD-free, both at home and abroad.”

Mr Watt said while the risk of Foot and Mouth Disease (FMD) or Lumpy Skin Disease (LSD) entering Australia is low, it is not zero.

“Australia remains FMD and LSD free, but we cannot afford to assume it will stay that way,” Minister Watt said.

“Expert judgment has assessed the risk of an FMD incursion in the next five years as 11.6% and 28% for LSD, so it is prudent to prepare now.

“While the Federal, State and Territory Governments all have well-developed biosecurity response plans in place, we will leave no stone unturned to ensure we are ready, should an outbreak occur,” he said.

“That’s why I have directed the establishment of this taskforce, to thoroughly assess our current level of national preparedness and advise of any improvements needed.

“Importantly, this taskforce will be co-chaired by senior experts in DAFF and EMA, bringing together the experts in biosecurity and animal health, along with the experts in disaster management, to work with States, Territories and industry.”

Mr Watt today neglected to mention that the addition of the likelihood judgments on African Horse Fever (13pc) and African Swine Fever (21pc) incursions put the combined estimated probability of an emergency animal disease incursion in Australia at 56pc within the next five years.

But he said it is prudent to make sure Australia is prepared now for a disease incursion.

“And that’s because good government’s plan for the best and prepare for the worst, that’s exactly what we are doing.”

“While the federal state and territory governments all have thorough well-developed biosecurity response plans in place, we will leave no stone unturned to ensure that we are ready should an outbreak occur here,” Mr Watt said.

When asked if an FMD outbreak in Australia is inevitable Mr Watt said: “I wouldn’t say that the risk is likely, I mean it’s obviously well below 50 percent, that risk.

“But we have had experts assessing the risk and this is the conclusion that they have reached,” he said.

“I don’t believe that it is inevitable that these diseases (will) reach Australia and we’ll be trying very very hard, along with industry and travellers and state and territory governments to make sure of that,” he said.

“But it does make sense to be fully prepared if we were to see an outbreak occur here.”

Ms Simson said if a serious disease such as FMD hits Australia, it won’t just be an industry problem.

“It’s appropriate to have a broad cross section of emergency management agencies come together to support the ongoing review and enhancement of our preparedness and response plans.

“It’s critical that this new Taskforce establish a strong working partnership with industry, including our established structures and formalised response frameworks,” she said.

“Australia remains free from FMD and Lumpy Skin Disease (LSD), but these threats and others are right on our doorstep.

“Now is the time to check and re-check our preparedness, while ensuring every step is taken to keep these diseases off our shores,” she said.

All passengers coming back from Indonesia are currently being assessed, but only those deemed to be a risk after profiling have their luggage checked by detector dogs. Detector dogs are being used as part of Australia’s border detection capability for passengers from Indonesia.

“A passenger may be intervened with by a biosecurity officer for targeted questioning, X-ray screening, detector dog screening or baggage inspection,” the Department of Agriculture Forestry and Fisheries spokesperson said.