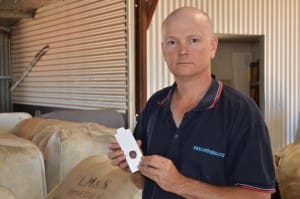 A willingness to try something new and to adopt technology early has dramatically changed the Mortimer family’s sheep breeding operation in central west NSW.

The Mortimers and the members of the Centre Plus ram breeding group are enjoying the benefits of accelerated rates of genetic improvement in their flocks with generation intervals being shortened by up to a year.

Centre Plus group leader Mark Mortimer said the group’s eagerness to be at the cutting edge of research and development is built on the belief in new technology as an enabling mechanism for lifting the performance of individual producers, their flocks and the industry as a whole.

“For me there is a real excitement in finding something new, something that hasn’t been discovered before.

“Certainly, you go down some blind roads before you find the path that you need, but by the time we have bedded down one technology and are using it efficiently, we’ll be trying what the next tool is,” Mr Mortimer said.

The Mortimers are based at ‘Devondale’ at Tullamore in Central West NSW and run the breeding nucleus of 1200 ewes for the Centre Plus Ram Breeding Group.
“We have always been open to new technology and virtually all the technology in use here was adopted very early,” he said.
“In the early days it was as simple as micron testing of the ewes, now we use Australian Sheep Breeding Values (ASBVs) and routine DNA testing.
“Whenever the latest genetic tools come on the market we are certainly looking at them and wanting to be involved in using them early.”
By incorporating advanced genetic measurement tools including DNA testing into the business, the Mortimers have been able to introduce proven genetics to the nucleus flock a full year earlier than under traditional management systems.
“We are objectively measuring what I call the economic traits – the ones that make you your money, while we need to give up some of our visual selection pressure,” he said.“The breeding objectives for Centre Plus have always been focused on the ‘all purpose Merino’.
“At the beginning it was growth rate, fertility and lowering micron, while holding fleece weight steady,” he said.
“Over the last decade the focus has moved from reducing micron to increasing fleece weight and improving other traits such as worm egg counts, eye muscle and staple strength.”

The Mortimers willingness to adopt new technology opened the way for Centre Plus to be an early participant in the Cooperative Research Centre for Sheep Industry Innovation (Sheep CRC) Genomics Pilot Program. The early results of that program revealed the potential gains on offer from DNA testing and as a result Mr Mortimer has since tested 20 percent of the male drop each year for traits aligned with Centre Plus’s breeding objectives.
“At weaning time about 20 of those 100 ram lambs are selected to be potential sires, and they are taken out and fed to reach breeding weight at six months.
“At that stage, six of those young rams will be chosen to go out into the mating program,” he said.

Mr Mortimer was also an early user of the Sheep CRC’s DNA test for parentage to give a clearer picture of the genetic make-up of young animals.

“When selecting a six-month old rams on the basis of genomic information, we are seeing progeny on the ground with results very close to the ASBV predictions.

“By using the six-month-old rams we’re getting the genetics into the flock a whole year earlier which will speed up our genetic gain considerably,” he said.
“So we now need to look at moving that technology further out into the Centre Plus system.
“This opens up a lot of options for Centre Plus that haven’t been embedded into the system yet, but we are in the process of working on how to best use the new genomic technologies throughout the broader Centre Plus network.”

Mr Mortimer said there was an understandable wariness in the industry about new technology, as it was human nature to be hesitant about relying on a technology when not knowing exactly how it worked.
“There are times where you have to force yourself to make changes, and back it up with measurements afterwards to make sure that it worked as expected,” he said.
“I think DNA technology is one technology that changes how you do things and many people aren’t keen to change how they have their breeding programs set up and how they operate.
“But it does open up completely new ways of doing things, which is also very exciting,” Mr Mortimer said.
“As we look for the next technological advance to improve our genetic gain – and the improving DNA technology and the Sheep CRC’s work in full sequencing looks promising – we will be keeping a close eye on the benefits that are on offer in the future.“The bottom line is that if you want to advance you normally need to change what you are doing and it’s important to take action,” he said.
“If you are presented with an opportunity to try something, you need to have a go at it but you also need to measure the outcomes very carefully so you don’t blindly accept that something new is working, if it isn’t.
“Make a decision based on the action required.”
More information on objective selection tools, ASBVs and DNA testing is available at www.sheepcrc.org.au Visit http://youtu.be/fZ1NrK_joSo to view a video interview with Mark Mortimer.