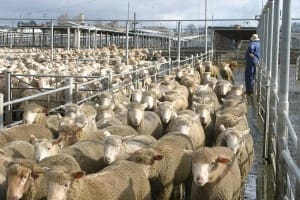 Prices improved for the better well-finished lambs in some smaller yardings, but larger offerings came under pressure on price and because of freshness and skin quality issues.

Even failed crops across Victoria’s Mallee and parts of the Wimmera are becoming inadequate to finish new season lambs, though producers are appreciating rates up to 510c/kg for the best trade and heavy lambs, and over 450c/kg for light and restocker lambs.

The NLRS said there were good numbers of trade and heavy weight new season lambs, along with a fair selection of old lambs, but not quite the standard of the previous sale.

Ray White Rural Dubbo agent David Armitage said quality, greater numbers and the season affected prices this week, with many producers running out of options due to the season.

“An inch or two of rain would change everything.

“The season is right on a knife’s edge here.”

The NLRS said there were some very good quality well-finished young lambs, while old lamb quality was very mixed. The regular lamb and sheep buyers attended.

There were some good quality well-finished sheep, some with good skin value, and these sold firm to slightly dearer.

The NLRS said quality was mixed in the 15,750 new season lambs, with some well-finished, but more showing signs of dryness. The usual buyers competed in a firm to slightly cheaper market.

Mutton numbers fell slightly, with Merinos making up the majority. Quality was mixed though there were some very good lines of medium and heavy weight sheep on offer. Prices slipped $10 and more for some pens. Merino ewes sold from $71-$105 and crossbreds made $70-$94. Merino wethers sold from $71-$100.

The NLRS said there was a fair selection of good quality young lambs, however old lambs made up most of the penning. Quality was fair to good, with some well-finished heavy and extra heavy weights. An extra buyer created strong competition on light and medium weight trade lambs.

The light and medium weight trade lambs were dearer trend due to the extra competition and quality. Despite their very good quality, the heavy and extra heavy lambs sold cheaper, in line with recent markets in the north.

The very good medium and heavy sheep penned sold to a much cheaper trend.

Young lambs firm to $3 down at Bendigo

The NLRS said new season lambs from the local Bendigo area and southern NSW dominated the market. Quality was more mixed with some starting to show signs of dryness in the skin. The quality of the top drafts was very good, with these young lambs showing more maturity. Prices for young lambs were from firm to $3 easier.

Quality was mixed in the 3000 old lambs. A few pens of better-bred and finished lambs sold from $102-$134, or 450c/kg-470c/kg cwt. Plainer types lacking weight and finish were discounted.

“It’s good because the processors are holding prices at reasonable levels.
“It’s good money for everything.”

Nigel said he had producers averaging $101-$105, and up to $110 for new season drafts over the past four weeks, with their bottom lines making $90.

Lambs were being turned off failed crops across the Wimmera and parts of the Mallee, he said.

Old lamb numbers continue to dissipate and heavy weight crossbreds sold from $100 to $116, while Merinos made from $90-$116.

Most lambs $5-$8 cheaper at Naracoorte

Sheep firm to $5 dearer at Muchea

The NLRS said about 1700 new season and 1,400 old lambs were penned. Prime new season trade lambs were in reasonable numbers but very few heavy lambs and the old lambs were plain. Trade lamb prices eased by $3/head, with light and restocking drafts firm. Wether and ram sales were equal.